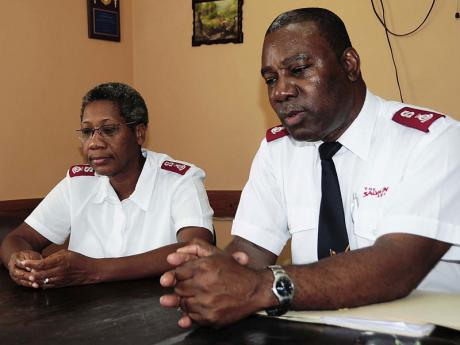 WESTERN BUREAU:Despite the economic crunch that could dry up donors' contributions to the Salvation Army in western Jamaica, divisional commander Major Darrell Wilkinson and his wife, Joan, are determined to meet the increasing needs of those who come through their doors.

"The people have a social conscience. They have been wonderful, especially the business operators and some hotels. Someone always comes on time," Wilkinson told Western Focus on Tuesday.

"However, some are forced to cut back, even as the demand for help increases, but we still manage to serve. It must be some divine intervention that keeps us going."

The western division is made up of the parishes of St James, Trelawny, Hanover, Westmoreland, and St Elizabeth and consists of 28 churches.

Described as a Christian organisation with an acute social conscience, the Salvation Army ministry spends about $5 million monthly to conduct various programmes, including a daily street people feeding programme and a medical fellowship involving retired and current health professionals, visiting the homes of the elderly and assisting with basic everyday chores.

The headquarters, located at Westgreen in Montego Bay, St James, takes over $12 million annually to operate, with a huge chunk of the funds covering utility bills.

A choice project of the organisation is the support of early-childhood education, with a major achievement being the recent completion of a basic school in Lucea, Hanover.

"We want to tackle the literacy issue in Jamaica. The registration during our Christmas treats shows the seriousness of the situation, with a number of persons unable to read and write," said Joan Wilkinson.

The couple hails from Barbados. They have been involved with the Salvation Army from an early age. They have served as administrators in Guyana, The Bahamas, Barbados, and Trinidad and Tobago since 1985. They are now on their second stint in Jamaica, having done duties in the Salvation Army Eastern Jamaica Division years ago.

"We don't only serve the financially poor," Joan Wilkinson explained. "There are many wealthy that utilise our services. They have money, but they suffer from spiritual and mental poverty. We are here for everyone."

The Wilkinsons are convinced they have been called to serve, with the major giving up a successful business to minister to humanity.

"If you are talking about financial rewards, this would not be it," he said. "We are paid allowances, which are not always guaranteed, but the satisfaction of being used by God to make a difference in the life of people is just reward. There is a joy and fulfilment in serving others."

Without overheads such as salaries, the Salvation Army, with a presence in 124 countries worldwide, including 17 Caribbean territories, is able to return 80 per cent or more of every dollar received to the public through ministry.

"There are two things that the Salvation Army takes more seriously than others: accounting for the finances, and we don't tolerate any form of sexual immorality (among the leadership)," Joan Wilkinson declared.