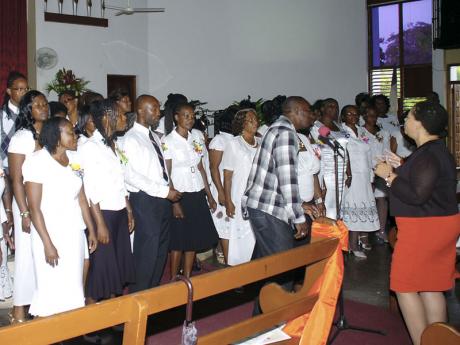 The 62 parent-trainer graduates of the Citizen Security and Justice Programme (CSJP) in Montego Bay perform a musical item during their graduation ceremony at the Calvary Baptist Church in Montego Bay on Thursday. The graduates were trained in parenting skills during a six-month period under the CSJP, a crime and violence prevention initiative created by the National Security Ministry.- Photos by Christopher Thomas 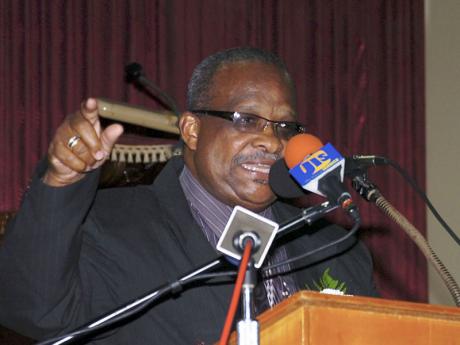 Lloyd B. Smith, member of parliament for Central St James, delivers the keynote address during a graduation ceremony for 62 participants in the Citizen Security and Justice Programme's (CSJP) parent-trainer initiative, held at the Calvary Baptist Church in Montego Bay on Thursday.
1
2

Legislation mooted to save children

WESTERN BUREAU:Member of Parliament for Central St James Lloyd B. Smith believes that government legislation is needed to make Jamaican parents accountable for their children's care and upbringing.

"If this country is to be saved from the brink of socio-economic disaster, then it may well mean that the Government will have to enact the type of legislation that must deal with the fact that there are irresponsible parents out there who are endangering their children's lives, allowing them to become corrupted, to be exploited, to be victims of sexual assault and criminal orientation," Smith declared.

"We have to find a way to reign in the parents; we need a national campaign. I am still waiting to hear from the prime minister and the opposition leader, coming out and speaking directly to the fathers and mothers of this country and saying 'Enough is enough. It is time for you to begin to take full responsibility for your children'."

Smith was speaking at a ceremony for parent-trainer graduates of the Citizen Security and Justice Programme (CSJP), held at the Calvary Baptist Church in Montego Bay last Thursday.

"There are too many young women who are having far too many children. I saw on television the other day, they were interviewing a woman in one of the inner-city areas in Kingston. She proudly said she had nine children, and she was following what the Bible said, 'to be fruitful and multiply'," he noted.

"In some countries, people are punished if they have more than two children. In China, for example, women are forced to have abortions after they've had two children. I don't think we should go down that road, but maybe we should begin to look at other incentives for those women who aren't able to contain themselves and not have too many children."

Smith, who is also the Deputy Speaker in the House of Represent-atives, told the graduates that parents are always responsible for their children's upbringing and well-being.

Some 62 parent-trainers from communities across the parish of St James graduated from the training exercise by the CSJP, a crime and violence prevention initiative created by the National Security Ministry.

During the six-month period, participants were taught how to improve their parenting skills and were charged with training other parents in their communities.