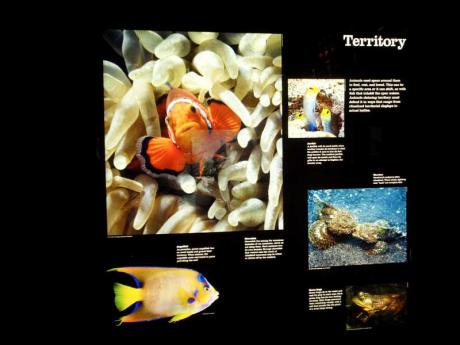 Exhibition guide at the National Aquarium.- Photos by Laura Tanna

Baltimore, Maryland, famous today for a multitude of historic sites, acclaimed medical facilities associated with John's Hopkins University, world-class museums, a technologically advanced National Aquarium, scores of excellent restaurants, a picturesque harbour and, for sports fans, the Baltimore Orioles baseball team and the Ravens football team, is a city worth visiting, though it's the 'Inner Harbor' redevelopment which has engendered a recent resurgence in tourism.

Let's start in the Inner Harbor with the National Aquarium. Glass triangles jut into the sky. Racy neon blue waves light up both the interior and exterior, zigzagging escalators and circular ramps carry you eyeball to eyeball with sharks, sting rays and creatures from the deep one moment and then allow you to look down upon them from above. Colourfully informative displays, 4D short films, and a dolphin show make this an awesome centre of education and entertainment for adults and children alike.

An all-day water taxi pass costs $12 for adults, $6 for children and takes you to 13 different locations, including the Aquarium, the Science Center across the harbour, the American Visionary Art Museum which everyone raved about, and the Rusty Scupper, a seafood restaurant with picturesque harbour views from every table, day or night. Water taxis go all the way to Fell's Point and Fort McHenry.

While there are posh hotels by the Inner Harbor, including a new Four Seasons and the Pier Five boutique hotel, we stayed at the Inn at Henderson Wharf at Fell's Point. Built originally as a brick warehouse by the Baltimore & Ohio railroad for tobacco which came up from the South to be shipped overseas, the waterfront Inn may lack a restaurant for dinner, but historic, cobblestoned Fell's Point neighbourhood is great for exploring local cafes, pubs, and taverns. Around the corner lies the Frederick Douglass-Isaac Myers Maritime Park, an African-American heritage site recounting the history of the first black-owned shipyard in the United States. More than 600 ships were built in this area, from 1726 colonial days right through the Civil War. Because Baltimore supported so many privateers targeting British ships during the War of 1812, Fort McHenry was attacked by the British in the famous battle where Francis Scott Key wrote The Star-Spangled Banner, which became the US national anthem. This year marks the bicentennial anniversary of the War of 1812, when the 36-year-old American government fought off England's attempt to take back her former colonies, the British actually burning down the Capitol in Washington before losing the battle at Ft McHenry.

Baltimore's fortunes waned when larger ships could not be accommodated or built in the harbour and though many immigrants of various nationalities arrived and worked in the manufacturing trade, eventually that too faltered and parts of the city decayed. But one area populated largely from 1900 onwards by Italians retains its charm, houses being handed from one generation to the next, so Little Italy, just northwest of Fell's Point, is filled with wonderful restaurants. We ate at Aldo's Ristorante Italiano, which allowed me to enjoy some of Maryland's famous crab meat, while my husband enjoyed pasta. The elegant ambiance suggested Southern charm. Another day we tried Da Mimmo where the Cricchio family has recreated Sicilian warmth. Michael, the maitre d', was as entertaining as the photographs of movie stars who had dined there, with the added beauty of paintings by actor Tony Bennett. One noon, we ventured beyond Little Italy to Di Pasquale's Deli which we'd seen on a Food Channel television programme. You select from the deli, then find a seat at tables to the side of shelves stocked with imported Italian specialties. Striking up a conversation with a born-and-bred Baltimore couple next to us, they suggested we try Sotto Sopra for great food in a beautiful 19th century house on N. Charles Street. La Scala was another restaurant recommended by our hotel.

Sherwood Gardens, near Johns Hopkins University, with its tulips and flowering shrubs, was colourful, though the cloudy weather put a damper on visiting the Cylburn Arboretum, and its acres of enchanting foliage. Unexpected treats included suddenly sighting numerous golden domes of the Ukrainian Catholic Church, and on another occasion, the magnificent Presbyterian and Episcopalian Churches in the Mt Vernon neighbourhood near the Washington and Lafayette monuments. Like Jamaica, these older British colonial settlements are covered with all manner of architecturally astonishing places of worship.

What really truly amazed me about this city was its magnificent museums. The Baltimore Museum of Art, at 10 Art Museum Drive, open 10 a.m. to 5 p.m. Wednesday to Friday, 11 a.m. to 6 p.m. Saturday to Sunday is absolutely free of charge because of generous endowments from several families. If only the thousands of artefacts stored in the basement of the Institute of Jamaica were permanently displayed thanks to the same generosity, think of what we could have in Jamaica. A museum with striking architecture in a good location would attract both tourism and further donations of value. The Baltimore Museum of Art is world-class with the largest number of Matisse paintings anywhere thanks to Claribel and Etta Cone who gave their collection to the city in 1950. The ground floor has stunning displays of African, Oceana and Asian works as well as an attractive outdoor sculpture garden and Gertrude's, a popular museum restaurant.

The Reginald F. Lewis Museum of Maryland African American History and Culture is another fascinating place, while the National Katyn Memorial to massacred Polish prisoners of war just indicates the ethnic diversity of Baltimore's many sites worth experiencing. There's something of interest for everyone in Baltimore.

This is the second of a two-part series. See last week's Sunday Gleaner for Part I.