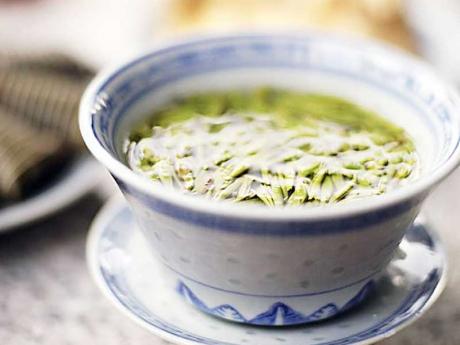 Jamaican folklore has much information about the many herbs we use as cures for a host of illnesses and ailments. This has been so for a long time, and might have begun when doctors and hospitals were few and expensive. Besides these herbs, there are certain foods which we also use as cures.

In recent years, scientists have been working at developing some of these and have discovered that much of what was thought to be 'old wives tales' is, in fact, true. For instance, Canasol - a derivative from cannabis (ganja) which is used to treat glaucoma. However, as effective as we have thought these cures to be, we should be careful as they can also have adverse side effects.

China has, for thousands of years, used home remedies and food is no exception. The Chinese are proud of their food and they believe in the use of these foods to cure and prevent disease. It is said that Chinese live to eat and the West eat to live.

Southern China's diet consists of much more vegetable than red meat, as well as peas, beans and fish.

One of the most common foods touted for their health benefits is soy. Soy has been used in China for centuries. It was introduced to Britain in the 1790s and cultivated in Kew Gardens. It is believed to have been taken to the United States by Thomas Jefferson. Today, it is eaten worldwide - green, dried or processed.

As tofu, it is used in a variety of dishes and, in Jamaica, it is a primary source of protein for many vegetarians and vegans.

Soy milk is also used by many and is ideal for persons who are lactose intolerant. Other popular soy products include, bean paste, soy sauce, miso, tempeh and soy sheets (fu jzu).

Soy is said to decrease the risk of some cancers and is a healthier option than meat. A hot cup of soy milk in the morning is believed to help with bad breath. It is also said to lower cholesterol, prevent osteoporosis and to treat pre- and postmenstrual problems in women. Western scientists have also begun to isolate some of the elements of soy for specific purposes and these are now available in tablet or powdered form or as food supplements.

Water is widely consumed by Chinese but not iced water. They believe that iced water is very bad for the body, especially during a meal as they claim it inhibits digestion. In their view, warm water is better.

Tea is the other food that is widely consumed and is the most popular drink in China.

Tea is the original name in Chinese, although it is called Cha in some dialects. Real tea is made from the leaves of the Camellia Sinensis plant and has been used in China since 200 BC. It became very popular by 600 to 100 AD when its use spread across China. Tea drinking is now quite popular in British and western societies.

The Chinese also believe in the use of ginger for healing and cook with it in many dishes.

Ginseng is said to be a cure for impotence and stress management as well as to promote improved memory and concentration. However, this has to be the real plant which is found deep in the forests of China, naturally, and cannot be commercially grown.

For thousands of years, gingko biloba has been used in China to treat loss of memory. Gingko is now being marketed in the West. A growing number of scientists agree with the Chinese that food is good medicine as 'you are what you eat' is a widely held Chinese belief.

People worldwide have relied on natural cures but what works for one person might not work for another. Scientists are constantly doing research to find out how to best utilise the health benefits of food, but the next time you have a migraine, drink some tea and tie some leaf-of-life or trumpet leaf or castor oil leaf on your head, it might just work.