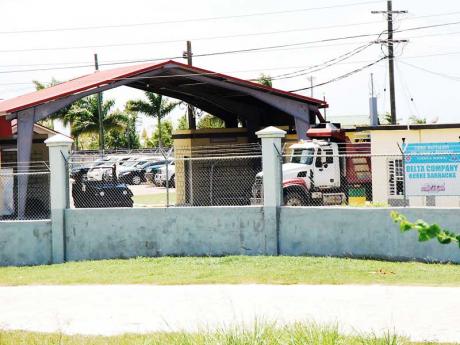 The JDF facility in Montego Bay, St James, with the confiscated vehicles visible through the open-sided building.

Western Bureau:When the 'Lotto Scam' came to the fore in 2006, one of the signs that some western Jamaica communities were awash with cash was the sudden appearance of numerous luxury motor vehicles driven by young men with no known legitimate source of income.

It was not unusual to see an 18 year-old man, fresh out of school, driving a BMW X5, Range Rover, Lexus or just about any of the latest sports utility vehicles, equipped with state-of-the-art sound system and sporting top-of-the-line rims.

However, after years of bilking unsuspecting American citizens, who were conned out of approximately US$30 million last year, the 'scammers' are now on the run, under relentless pressure from the local police and their United States counterparts.

One striking sign that the 'scammers' are under pressure is that many of their trademark SUVs are now out of circulation - seized by the police, sold off at 'dirt-cheap' prices or stashed away in the private garages of 'straight' friends. If one should visit the Jamaica Defence Force base in Montego Bay, one could be fooled into believing he or she had just entered an upscale car mart, based on the large number of seized high-end vehicles littering the compound.

The hot rides will not be hitting the road anytime soon.

"These vehicles will be used as evidence in court in the cases against the individuals from whom they were seized," Superintendent Leon Clunie, head of the task force going after the scammers, said. "Most of the individuals now under arrest will face charges under the Proceeds of Crime Act (POCA). If they are found guilty the ill-gotten asset will go to the state under the Forfeiture of Assets Act," said Superintendent Clunie. "To date we have seized over 50 vehicles."

The Proceeds of Crime Act, enacted in 2006, is designed to go after drug-dealers and those involved in money laundering and other financial crimes.

"This initiative is about separating criminals from their wealth," said Clunie. "Once we lay hands on the ill-gotten assets they will become government property."

While the less expensive vehicles such as the Toyota Corollas, which are popular with some 'scammers', could be added to the police's fleet, the high-end vehicles could end up on the auction block, the proceeds going into the State coffers. According to Superintendent Clunie, the high-end vehicles seized include brands and makes such as Lexus, BMW, Nissan Skyline, Lincoln Navigator, Toyota Prado and Rav 4.

"Some of the high-end vehicles are worth in excess of J$10 million dollars," a Montego Bay car dealer told Automotives. "If government seize 30 or 40 such vehicles you are looking at about half a billion dollars in total value."

Responding to reports that scammers are trying to sell off their vehicles at dirt-cheap prices, with a $2.5 million vehicle going for as low as $1 million, the police are issuing a warning about buying into a seemingly sweet deal which could turn sour.

"If you use clean money to buy a dirty item, the purchase becomes contaminated," the police have said. As a buyer, you need to exercise due diligence because if you don't, you could find yourself in trouble."

With the justice system now preparing to throw the book at the accused 'scammers', the government is also poised to find itself in the enviable position of getting a windfall chockful of expensive vehicles.