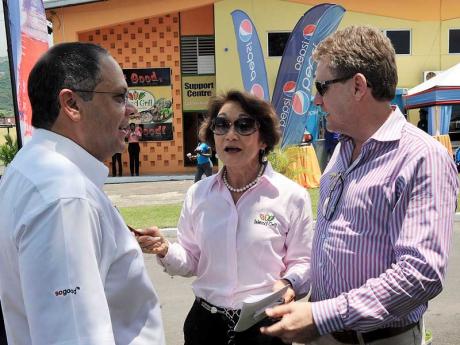 Fast-food company Island Grill says it plans to spend approximately J$100 million per year over the next five years to increase its presence in the local market.

The Jamaican chain plans to add 15 more stores to its operation.

"We are not going to give up on any export opportunities that we think are good, but our big focus now is building out the local market because we believe we can have up to 40 stores locally," said Albert Bailey, general manager of Island Grill.

"We will invest every year for the next five years upwards of J$100 million per year and that is going to help create a lot of jobs for people," he said.

Island Grill was first founded in 1991 by Thalia Lyn under the name Chicken Supreme, but then rebranded to its present name in 1998.

Since then, the company has grown to 15 restaurant locations across Jamaica and one in Barbados, together employing just over 500 persons.

The growth plan now is for island Grill to open three new restaurants each year for the next five years, having just completed the build-out of a new commissary to support the capacity.

"We now have the infrastructure to support growth, we have not been growing as much as we needed over the last couple of years because the commissary facility was insufficient to support that growth in an efficient way, what we have now done is to invest in the infrastructure and now we have the capacity to grow and the vision is to add three new restaurants every year for the next five years," said Bailey at the launch of the company's mobile unit on Valentine Drive in Kingston on Friday.

With an investment of J$200 million, the new commissary opened in December 2011. It has approximately 13,000 square feet of storage space and 12 temperature controlled production areas.

Lyn said the commissary will take much of the 'busy work' out of the restaurants, so that workers can refocus on customer service.

"We will move from a 'cook, hold and serve' to more 'serve' with much of the production centralised," she said.

Along with the expansion of its restaurants, the company has also just launched a mobile unit equipped with a 1,200-square foot kitchen, allowing for the preparation of thousands of meals for events.

"We can deliver these meals in our mobile units to both events and areas where we don't yet have restaurants," said Bailey.

"In the first instance though, it will be used as a temporary facility at UTech while we construct a more permanent facility," he said.

In fact, the facility to be built at UTech will be one of the three new restaurants to be opened this fiscal year.

The other two will be in downtown Kingston at the Digicel building under construction while the other is to be located in Savanna-la-Mar.

Each restaurant, according to Bailey, will cost somewhere in the region of J$25 million.

But alongside the build-out of the restaurants will also be the expansion of the company's new mobile and catering service.

"This is the first of many mobile units, we want to use them also to build relationship with schools, build relationship with organisations for various function and just wherever the need be because we believe that there is tremendous potential for the growth of that kind of catering business and hence this is just the start of that process," he said.

The mobile unit, according to Bailey costs J$7 million to J$8 million, and will give the company great flexibility.

"Wherever the need is we can go out there and satisfy that need," he said.

"Between the mobile units and the more traditional restaurants with we are going to be having a significant presence in the local market."

Together with the mobile unit and the commissary, Island Grill has created 82 new jobs.

Within Island Grill's growth strategy is also to expand its presence outside of Jamaica.

"We have a strategy to expand in the Caribbean then to move into North America, but right now we don't want to spread ourselves too thin, so what we are doing is just focusing on the potential here and then in the next phase of the growth, we move outward," Bailey said.

"But if opportunities come up that we think are prime, we will definitely look at them."