Maths: what preschool kids should be learning 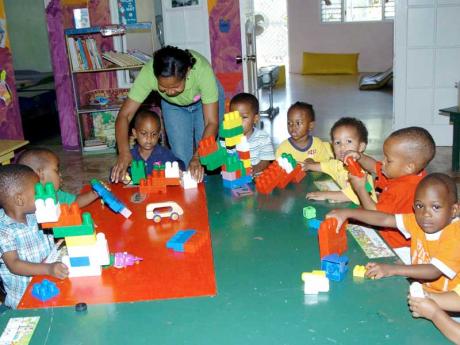 Kristina Leeb-Lundberg, an early-childhood education professor, told a true story of five-year-old Mary who went to the park with her parents. It was spring, and a mother duck was seen swimming with her ducklings behind her. Mary's proud parents, who knew that she could count beyond 20 and 'knew her numbers', wanted to show off her ability to her friends.

Her father said, "Mary, tell me how many ducklings are swimming behind the mother duck?"

Mary, fearful and reluctant, was not able to tell her father how many ducklings there were. "But Mary, you know that mother duck has five ducklings," her father said. Mary burst into tears and said, "There's no one in the middle."

The disappointed parents could not understand Mary's problem, and they decided to speak with her teacher next day. As they entered the classroom, there on the wall was the answer to the mystery. They saw big domino picture cards of numbers one to 10. The pattern of five had a dot in the middle, just like the domino, and it was the only thing Mary knew about the number five. It had become clear to Mary's parents that she did not understand the concept of five or the fiveness of five in different situations.

This story should help many parents and preschool teachers to understand that mathematics is more than counting. For a young child, counting is calling number names, just like saying nursery rhymes. Once a two-year-old is asked to count, without hesitation, he begins to count - one-four-three-six, and so on.

Children at the preschool stage depend a lot on their perception, that is, how they see things. Adults are sometimes puzzled as to why a child who recognised a set of four objects yesterday would call the same set 'five' today. A child who counts a set of six balls in a picture book may have difficulty picking up six objects from a pile. Workbooks are not for teaching concepts; they are useful for reinforcement only.

Long before children enter preschool, they have acquired several mathematical skills. Because knowledge is actively constructed by the learner, children's ideas and methods of solving problems may not correspond to those prescribed by their teachers. Preschoolers devise their own method of sharing, adding and subtracting. "One for me, one for you," is their preferred way of sharing, as they are engaged in problem solving.

What then is problem solving in early-childhood education? It is a form of reasoning. It is invaluable to intellectual development, for in solving a problem almost all the thought processes are engaged. A child has to decide if he should combine the sets, separate them, or add some more. Knowledgeable teachers pose the problems and wait for each child to decide what action to take. When these processes are applied, there is no need for a chalkboard. The children apply thinking skills through hypothesising, ordering and estimating. They learn how to listen and think.

A child who is asked to add together six lollipops and three lollipops in a picture book does not require problem-solving skills because the pictures are always there for the child to count. Immediately after the child writes a 9 for the answer, if asked, 'What is 3 + 6?' The teacher gets a puzzled look on the child's face. If a child has to figure out the following, Jack has 6 sweets, Jill has 3 sweets, and how many do they have together? Who has more? How many more? Who has fewer? How many fewer? How many more Jill needs to have the same number as Jack? They are then asked to draw pictures of these operations. These are the kinds of number operations in which preschoolers are engaged. At the end of preschool, the children would have mastered the four rules of applying number operations which they have learnt for themselves.

Concept of time is one of the concepts on measurement. It is the difficult concept to be grasped by young children.

Morning, evening, afternoon has no meaning unless they are identified or attached to some activity or event. Every teacher knows that the days of the week are a constant guessing game. What day is it today? There is more success if the first question is, 'What was yesterday?' And tomorrow comes after you go to bed, sleep and wake up.

Measurement of length often precedes the other measures. It is sometimes incidental to another activity, for example, longer, taller, shorter, narrower, wider and learnt through everyday experiences. The use of units of the children's own choosing eventually leads to a real need for standard units. Children will be using words like 'pounds', 'feet', 'inches', 'metres' completely out of context, for example, 'It weighs three feet.' Children will associate sink and float with swim and drown.

Effective early-childhood training for the practitioners will eliminate the difficulties that the children experience later at the primary level. Children's language development is rapid when they have real experiences to talk about. Comparing is at the heart of learning mathematical concepts, and this comes through the art of effective questioning.

The earliest geometry begins when children play and construct. Why do children always want to hide in small spaces or go into boxes which are sometimes too small? They have not yet learnt to assess how much space is around them. They have not learnt the concept of spatial awareness. Children begin to form concepts of shape long before they enter preschool.

One of the greatest investments in preschool is to provide children with a stack of building blocks. High-quality preschools are filled with geometric manipulatives which give the children opportunities to learn spatial ideas. The art of restacking a box with a variety of geometric shapes so that every piece fits perfectly is one of the most challenging but rewarding tasks. Of course, children begin with simple jigsaw puzzles from as early as they can pick up objects. Children need to develop ideas about direction which is the beginning of map-making and reading.

A bad start to teaching mathematics by teachers who have not been trained will continue to create havoc in the lives of students who do not know how to think. Early mathematical tasks like music is the surest way to build thinking skills. Introducing children to discovering mathematical skills can be exciting. However, it is the teacher's own enthusiasm and interests which are often 'caught' by the children and transformed by them.

Eugena Robinson is an early-childhood specialist. Email feedback to columns@gleanerjm.com and r_eugena@yahoo.com.