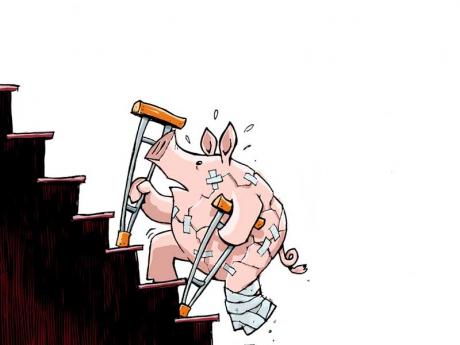 The Throne Speech was cheerily titled 'Nation on a Mission'. By the afternoon when the Estimates of Expenditure were tabled in Parliament, cynics could be forgiven if they added 'impossible' to the title.

For when one looks at the huge chunk which is going to debt and interest payments, and the little left for anything else, it's going to take a miracle for any growth to come out of this Budget. As a globalist who has always maintained that decisions taken in Washington, New York, Geneva, Brussels and Beijing are far more important to Jamaica than decisions taken at Jamaica House (whoever its occupant is), I was again reinforced in that view by looking at the stark figures in this year's Budget.

No matter how you cut it, there is almost no wiggle room for development. This is a crisis not just for this People's National Party (PNP) Government. It is a crisis for the country. A Jamaica Labour Party (JLP) Government would be in the same bind. In interviews after the Throne Speech last Thursday, Opposition Leader Andrew Holness was pleased to tell reporters that the Throne Speech represented nothing new but was a rehashing of old JLP policies.

The fact is that our two main political parties have the same deck of cards - a deck which is stacked against both of them. Our analysts, pundits and political propagandists will continue to spend their time in miniature, debating details and specifics, while missing the overarching dilemmas. At the end of all their analyses, we still have to contend with the brutal fact that health, education and justice have been cut - much to the deep regret, I am sure, of every single Cabinet minister, not least of whom would be Prime Minister Portia Simpson Miller herself.

The country has to wake up to the real nature of its crisis. It is not just a crisis of mismanagement of the economy and the misalignment of priorities, though those are factors. It is not just a matter, as The Gleaner sees it, of reining in the 'populist' Portia Simpson Miller; and having her use her enormous emotional and political capital to sell austerity and to leave the more 'sober', 'restrained' and 'fiscally prudent' Peter Phillips to have his way. It's not just a matter of accepting, hook, line and sinker, the Private Sector Working Group's magic wand of tax proposals and, abracadabra, the economy would be set on a right footing.

The truth is, Jamaica needs a people's Budget, not a creditors' Budget, as Dennis Chung aptly described this Budget in an interview on Nationwide at Five last Thursday evening. This Budget has been crafted to gain the approval of the International Monetary Fund (IMF) and the other multilaterals on which we depend for our economic lifeblood. This budget is what the neoliberals would call 'a credible budget', meaning one that is tight, lean and meets the criteria of the Washington Consensus. It should make it easier for us to raise money on the international capital markets.

Now radicals like my friend, Lloyd D'Aguilar, might rail that this PNP administration is a sell-out and is really anti-people, but let's get a reality check here. Unilateral debt cancellation, or default, is not a viable option.

Jamaica is not Argentina. Small, open, trade-dependent island states like Jamaica don't have the options that 'too big to fail" states have. Get out of the fantasy world. Stop the wishful thinking. Yes, I have already conceded that only divine intervention could make this Budget one that is growth-inducing, but any expansionary Budget that would not meet the dictates of our masters in the IMF would be quick suicide. Our choice: the Devil and the deep blue sea.

There is one glimmer of hope, however, and that is the firm, unflinching influence of Portia Simpson Miller. Portia will fight to the death to try to snatch whatever victory she can from the jaws of IMF defeat. The Gleaner's fear is precisely my hope: It is Portia's ideological and emotional commitment to the poor, her deep understanding of the needs of the Jamaican masses, which stands as a beacon of hope in this dark wilderness of neoliberal globalisation.

I don't believe Portia is a populist in the reckless sense in which the word is normally used. If she were, you would not have this kind of tight expenditure budget - a Budget which conservative financial analysts like Dennis Chung and Keith Collister say is even tighter than they expected. The Gleaner might see this as the restraining hand of Peter Phillips, but those who know Portia know that she is her own woman. You don't get Portia to do what you have not convinced her about.

Portia wants to balance both the books and people's lives, as she reiterated to CVM News after the Throne Speech was read. The Throne Speech, written by the Government, had some important clues and subtle messages. In diplomatic language, the speech said, "We anticipate that the IMF, together with other multilateral institutions, our bilateral partners and the financial markets here and abroad . will be supportive in enabling us to achieve the nation's principal objectives within the medium-term economic framework." And what are these "principal objectives?" They are, "appreciable and sustained economic growth; the restoration of our fiscal accounts to sustainable levels, and protection of the vulnerable, poor and working poor, to the maximum extent possible."

The third element is key. The major difference between the PNP and the JLP, and this is largely due to Portia's own leadership and uncompromising pro-poor commitment, is that while the JLP's neoliberalism is uncompromisingly trickle-down economics, the PNP specifically targets pro-poor outcomes. This is very important. I pointed out before the elections that this was a major difference which had emerged between the two parties and which was patently evident in their manifestos.

The JLP manifesto, with Holness' robust neoliberalism evident, was for macroeconomic stability, fiscal prudence, pro-cyclical policies and then economic growth and poverty alleviation would emerge. The PNP's manifesto stakes out an activist, interventionist role for the State, with pro-poor outcomes clearly identified and targeted. This is not to be missed.

It is not that the policies of the PNP are radically different from the JLP. No, the PNP is largely following JLP economic policies - which is good, for, contrary to some PNP propagandists, the JLP was doing many things right and was fiscally responsible. I have always maintained that what the JLP was doing was necessary but not sufficient. The PNP has been following those necessary things, and this Budget is reflective of that. But it is going further by specifically targeting for attention the vulnerable and the poor. This, in my view, is the superiority of the PNP's strategic approach. The PNP under Portia Simpson Miller is not just dogmatically following all the neoliberal prescriptions.

She has a philosophy of development which says people must be at the centre. Even her harshest critics concede that she does have a heart for the poor. The head of the IMF itself, Christine Lagarde, in a speech in Switzerland last week, said, interestingly, "Growth, of course, is not really an end in itself. It is a means to an end - enriching human lives, enabling human dignity, engendering human potential and developing progress. And for that we need a growth that spreads its gains far and wide." That is Portia's view - but Lagarde could say nothing less, of course, in a country which has pursued a growth-with-equity, social democratic path.

At a time of economic and social crisis, when powerful voices here and overseas are pushing their purist neoliberal ideas, you need a leader with a strong pro-poor commitment, yet with a keen eye for fiscal prudence.

For what the neoliberals must not lose sight of - and I particularly urge my own newspaper to keep this in mind - is that social instability and social unrest will disrupt any chances of economic growth. Investors are not going to be coming to Jamaica if crime and mayhem are increasing and the masses are burning and looting. Keeping social peace and alleviating poverty are important to growing the economy and important to sustaining fiscal prudence.

And without reforms at the global level, our prospects for development will also be severely constrained. That is why Michael Manley's call for a New International Economic Order continues to be relevant.

The Center for Economic and Policy Research issued a paper last week (Update on the Jamaican Economy) which shows the dead end of this IMF path we are on and the futility of our tinkering. "It is difficult to envision Jamaica overcoming its current situation of low growth and high debt without concerted multilateral debt relief or a far more ambitious debt restructuring." Precisely. Ignoramuses continue to scoff at calls for debt relief. The paper is right that IMF contractionary policies represent "a consistent transfer of output from taxpayers to domestic and foreign creditors," and a "serious impediment" to "the implementation of a development agenda". That's why this is simply a creditors' budget, as much as Portia might have wanted a people's budget.

And the IMF understands the need for some debt relief, make no mistake about it. In 2009, the IMF announced a US$17-billion plan to aid low-income countries with concessionary financing. The G-20 had asked the Fund to provide additional resources, recognising that they needed help to weather the global economic crisis. On May 2 this year, the IMF announced that profits from gold sales have been approved to help the world's poorest countries. When A.J. Nicholson suggested that some kind of reclassification should be done for a heavily indebted middle-income country like Jamaica, he was ridiculed by the ignorant in international affairs. The time is overdue for a reclassification.

The Update on the Jamaican Economy says, "Jamaica pays far more interest than any other country for which data are available." Hence, the urgent case for debt relief and concessionary arrangements. Otherwise we are simply rearranging the deck on the economic Titanic.

Lagarde said on May 2 that concessionary arrangements were "crucial to helping many of them (low-income countries) absorb further shocks and continue their efforts to achieve deeper and more sustainable economic growth." So what about Jamaica?