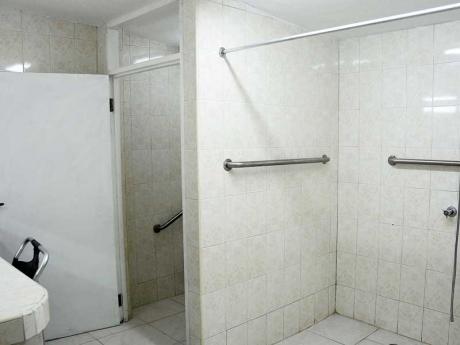 One of the refurbished bathrooms at the Golden Age Home in St Andrew. 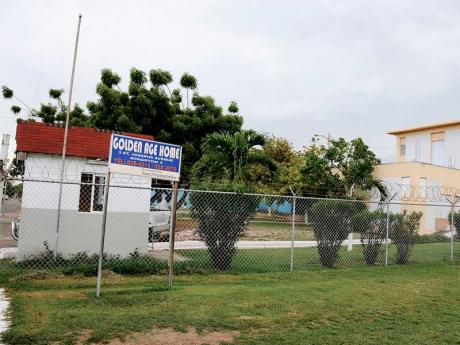 One year after Jamaica learnt of the abuse and neglect that were being meted out to several infirm and disabled residents at the Golden Age Home in Vineyard Town, St Andrew, there has been some improvement but there is much more work to be done.

That is a fact accepted by the present administrators but they point to a lack of resources as the main reason more has not been done.

Last week, general manager of the home, Laurette Adams-Thomas told The Sunday Gleaner that having been in the post since October of last year, her team has made significant strides and is determined to see a 100 per cent improvement by the end of the next fiscal year.

Adams-Thomas, — who was appointed after the contract of the previous manager Major Frank McCaulsky was not renewed — accepted that the situation is not perfect.

"Advocate for us that corporate Jamaica will help us as best as possible," pleaded Adams-Thomas.

The latest budgetary allocation to the home was $160 million but the administrators said that amount just covers the basic needs.

The home is currently spending approximately $800,000 per month to run each of its eight clusters but it really needs $1.5 million per cluster to properly provide for the residents.

"We just bought diapers in February and that was close to a million dollars per month for just four clusters. If we got that additional (money) that would help us in not only diapers but in medication as well," Donald Gayle, the home's assistant general manager explained as he pointed to some improvements which have taken place since The Sunday Gleaner's exposé one year ago.

This allows the administrators to streamline the care given to each inmate.

Another glimmer of hope is that in addition to the two bathrooms having already been improved, two more on Cluster D are slated to be retrofitted during this financial year.

The administrators said they are also moving to address the quality and quantity of the food provided for the residents.

When our news team returned to the home recently, we saw the two bathrooms on Cluster A which were renovated but pesky flies were still having their way with the mostly congenitally disabled residents on Cluster D.

In addition, the controversial practice of placing severely disabled residents on the floor seems to be continuing.

During our visit, some of the windows and the doors to the 'baby rooms' - so called because the occupants are not able to help themselves - on Cluster D were closed although it was the visiting hour.

Delfreda Cammock Thorpe, operations manager at the home told The Sunday Gleaner that the doors were closed because the residents were receiving their baths.

Cammock Thorpe said the patients were on the floor as a precursor to getting a shower.

"As I said to you before, it is tidying time … and they have to go to the bathroom," she explained.

However, Adams-Thomas accepted that it is inhumane to have the patients on the naked floor.

She argued that it would be difficult to overpower the army of pesky flies.

"It's kind of hard to eradicate the fly situation. This time when it is bathing time and there is the smell of urine, you are going to have a lot of flies coming around."

According to Adams-Thomas, the swarms of flies, some pitching on the faces of residents who cannot use their hands to fan them away, really descend on the institution in seasons.

She asserted that the fly problem was time-factored and only becomes unbearable when the diapers are being changed in the mornings and in the afternoons.

"Keep in mind that it was 23 to one because the gap was wide so you can imagine how difficult it was for one staff to 23. Even though we have increased it we are still not (at the required level)," Adam-Thomas admitted.

She said the ideal patient-to-staff ratio for a nursing home like the Golden Age Home should be six to one.

"It was once an assisted-living institution but is (now) more of a nursing institution. We are really trying to see how best we can get there but you know how it is with the money," the general manager lamented.

It has been more than a year since the shameful conditions were exposed by a Sunday Gleaner investigation, and while the authorities promised an investigation and the implementation of remedial measures, it appears that Adams-Thomas and her slate of administrators seem to have been given a basket to carry water.