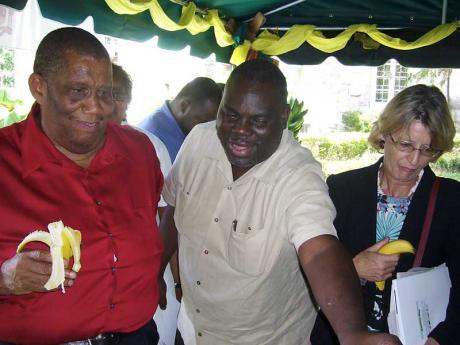 From left Agriculture Minister Roger Clarke with Donovan Stanberry, permanent secretary in the ministry of agriculture and fisheries, and Helen Jenkinson a representative of the European Union.-Photo by Gareth Davis 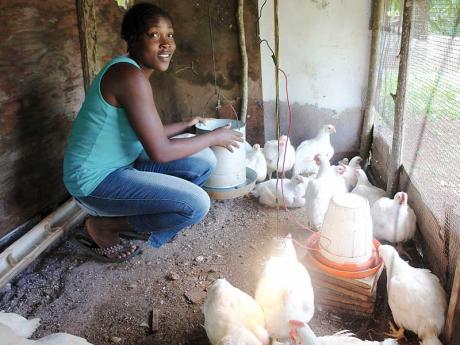 Calecia Johnson of Farm Town, Discovery Bay, is like a mother to her chickens raised under the GET START economic assistance programme -Contributed
1
2

MORE THAN 1,200 jobs are to be created in agriculture under the Government's flagship project, the Jamaica Emergency Employment Programme (JEEP).

"They are projects that are planned and when the money is in the budget they will be implemented in this financial year," Donovan Stanberry, the permanent secretary in the agriculture ministry told The Sunday Gleaner.

Information presented in the recently tabled estimates of expenditure for the 2012-2013 fiscal year indicates that the Government plans to spend $78 million to create 1,236 agriculture-related jobs.

A further $1 billion is allocated to the Ministry of Transport, Works and Housing for JEEP-related infrastructure programmes.

Funding for the agriculture portion of JEEP is to come from the PetroCaribe Fund.

JEEP is the manifestation of a campaign promise made by the People's National Party (PNP).

It is aimed at providing short-term employment for Jamaicans, in light of the cruel economic conditions.

Included in the list of JEEP projects that have been identified in agriculture is the spending of $14 million to foster the production of fruit juices and liquid eggs for the school-feeding programme.

"The school-feeding programme is going to underpin much of our agricultural thrust this year," Agriculture Minister Roger Clarke told The Sunday Gleaner.

Similarly, Stanberry said a number of opportunities for employment are to be created within the agriculture sector.

"Among them is a specific programme to promote community efforts to produce for the school feeding programme."

But Clarke and Stanberry refused to release any other information on the plans for the agriculture sector and its relationship with the JEEP.

Clarke said he would be speaking to those issues when he makes his contribution to the Budget debate on May 30.

Nonetheless, Clarke said the administration has identified two critical issues in agriculture that will be addressed this year.

"We are going to be making an onslaught on praedial larceny this year, in no uncertain terms," the minister added.

In the meantime, the Government has targeted agriculture as one key sector in creating employment.

The agriculture, hunting, forestry and fishing sector accounts for the largest proportion of the male labour force and in October 2011, its share of male classifiable labour force was 23 per cent.

The 2011 labour market survey, tabled in Parliament last Thursday, indicates that of the 1.2 million Jamaicans in the labour market, 159,700, or an increase of 10,700 over the 2010 number, were classified as unemployed.

The report, prepared and published by the Statistical Institute of Jamaica (STATIN), said employment in the industry group "wholesale and retail, and the repair of motor vehicles and equipment increased by 16,900 persons between October 2010 and October 2011".

During the same period, employment in "agriculture, hunting, forestry and fishing" declined by 29,100 persons.