Black America continues to back Obama 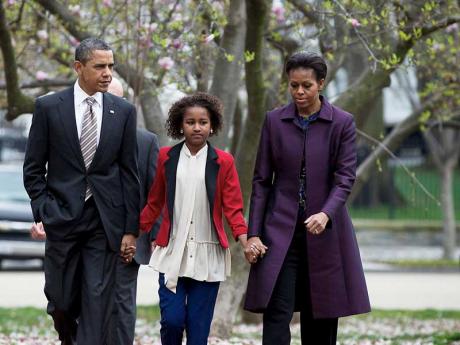 ARDMORE, Pa (AP):Like many black Americans, Dorsey Jackson does not believe in gay marriage, but he wasn't disillusioned when Barack Obama became the first president to support it.

The windows of his suburban Philadelphia barbershop still display an 'Obama 2012' placard and another that reads 'We've Got His Back'.

If Obama needs to endorse same-sex marriage to be re-elected, said Jackson, so be it: "Look, man - by any means necessary."

With that phrase popularised by the black radical Malcolm X, Jackson rebutted those who say Obama's new stand will weaken the massive black support he needs to win re-election in November.

Some questioned whether he really believes what he says about gay marriage or merely took that stand to help defeat Republican Mitt Romney - suggesting African Americans view the first black president less as an icon than as a straight-up politician who still feels like family.

"Obama is human," said Leon Givens of Charlotte, NC. "I don't have him on a pedestal."

On Tuesday, Givens voted in favour of banning gay marriage in North Carolina. Many black precincts voted 2-1 for the ballot measure, which passed easily.

The next day, Givens heard Obama tell the nation in a TV interview: "I think same-sex couples should be able to get married."

But this fall, Givens plans to register Obama voters and drive senior citizens to the polls.

A retired human resources manager, he suspects the president's pronouncement was "more a political thing than his true feelings". But he's not dwelling on it.

"We can agree to disagree on gay marriage," Givens said, "and then I leave him alone."

Obama won North Carolina in 2008 by a mere 14,000 votes, thanks largely to a huge black turnout. Nationally, 95 per cent of black voters chose Obama, and two million more black people voted than in 2004. No one doubts Obama will carry the black vote this year, but whether he can again turn out such large numbers could prove crucial to his chances.

African Americans have historically been more hostile to gays and lesbians than other racial and ethnic groups.

But blacks - like other Americans - have become more supportive of same-sex marriage in recent years. Black support has risen dramatically since 2008, when only 26 per cent of black people favoured gay marriage and 63 per cent were opposed, according to Pew.

Much of the opposition stems from religious beliefs. Church is the backbone of black America - 22 per cent of black people attend religious services more than once per week, compared with 11 per cent of whites, according to recent AP/GfK polls.

Mel Brown, a 65-year-old project manager in Philadelphia, says same-sex marriage "is between them and their God. The God I serve does not agree with that".

Does Obama's announcement change Brown's support for the president? "Absolutely not. Because Scripture says we all have sinned and fallen short of the glory of God."

Black voters, led by black churches, have played key roles in blocking same-sex marriage in states like California, where 2008 exit polls indicated about 70 per cent black opposition, and Maryland, where black Democrats were part of a statehouse coalition that stalled a gay marriage bill in 2011. (It was passed this year but may face a referendum in November.)

Part of the tension between gays and blacks comes from comparisons of their struggles. Some cast gay marriage as the last frontier of equal rights for all; others counter that minority status comes more from how you look than what you do.

Tanyeo Wotorson, a film producer and director in New York City, supports Obama's new position and said prohibitions on same-sex marriage "return to that time when whites could send people to the back of the bus and women couldn't vote".

Darian Aaron, a gay black man, acknowledges that there are differences between black issues and gay rights, but "at its core both groups are seeking to gain access to full equality under the law".

Obama's statement may actually be following the changing black opinion rather than leading it, said William Jelani Cobb, a Rutgers University professor and author of The Substance of Hope: Barack Obama and the Paradox of Progress.

"Presidencies tend to follow the culture, as opposed to being ahead of it," he said. "What this says is that the culture has gotten to a place where the executive branch feels like it can embrace this and not be so far ahead of the curve that they'll suffer really serious political damage for it."