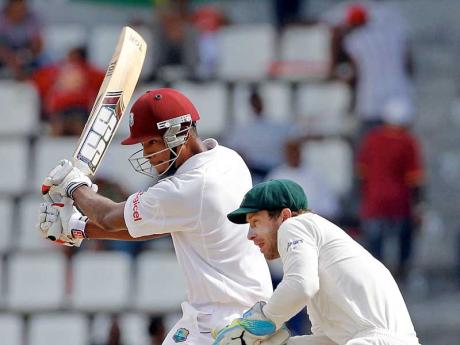 NORTHAMPTON, England (CMC):Rookie left-hander Kieran Powell eased some of the fears regarding West Indies' brittle top order, stroking his second first-class century to headline a resilient batting effort against England Lions as the Caribbean side enjoyed their best day on tour here yesterday.

The 22-year-old gathered 108, a knock that lay the foundation for West Indies' total of 377 for eight on the third day of their four-day tour match at Wantage Road.

Powell shared in two century stands, adding 108 for the fourth wicket with Darren Bravo who got 57, and a further 122 for the fifth wicket with veteran left-hander Shiv Chanderpaul who stroked 77, as the tourists kept the Lions in the field the entire day.

Marlon Samuels chipped in with 44 while wicketkeeper/batsman Denesh Ramdin was unbeaten on 31 at the close, to push the Windies lead-up to 183 runs ahead of today's final day.

Revelling in familiar sunny weather and in perhaps their best conditions so far on a rain-ravaged tour, West Indies fought back bravely after starting the day facing the prospect of an innings defeat on 28 for three.

Needing 166 runs to avoid that indignity, Powell and Bravo played beautifully in the first session to push West Indies to 133 without further loss at the lunch break.

Powell enjoyed a slice of luck early in the day after resuming on eight, when Nick Compton dropped a sharp chance to his right off Coles when the batsman had reached 17.

However, he pressed on unperturbed to count 13 fours and a six - a straight hit off off-spinner Joe Root - in an innings that spanned 310 minutes and 235 balls.

Bravo, meanwhile, chalked up his second half-century of the match, stroking nine fours in another attractive innings that required 92 balls and lasted 135 minutes.

The stylish left-hander, dropped on 19 and 51, finally departed in the second over after lunch at 134 for four, when he deflected a leg glance onto his stumps off Brooks.

Powell combined with Chanderpaul in another enterprising stand before the former finally perished on the brink of tea, bowled by Patel attempting a forcing back-foot shot.

Chanderpaul, who added 33 with Samuels for the sixth wicket, emerged from his customary slow start to hit nine fours off 154 balls in 176 minutes at the crease.

His innings ended when he misjudged a length ball from Meaker, shouldered arms and was lbw at 289 for six.

Samuels and Ramdin then ensured there would be no lower order collapse, putting on 65 for the seventh wicket.

The right-handed Samuels faced 77 balls in 104 minutes, hitting seven fours and one massive six - an astonishing hit over deep mid-wicket off seamer Jade Dernbach in an over that cost 15 runs.

He eventually miscued a pull to mid-on off Coles at 354 for seven, but Ramdin kept his head in seeing West Indies to the close, counting four fours off 47 balls in just under an hour-and-a-half at the crease.