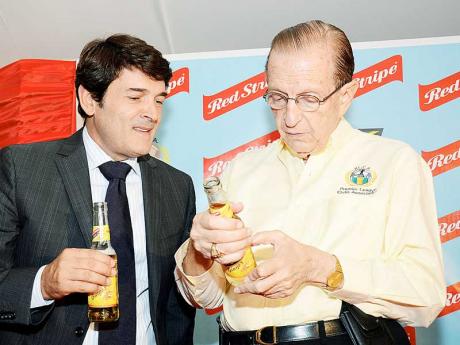 Red Stripe managing director, Renato Gonzalez, says his company is proud and pleased to be associated with what turned out to be an exciting 2011-12 staging of the Red Stripe Premier League (RSPL).

Gonzalez, who was instrumental in getting the local brewery to sponsor the league close to midway the season, also took the opportunity to congratulate Portmore United on holding off the challenge of Boys' Town to secure their fifth hold on the title.

"It is with an enormous sense of pride I reflect on what has been a tremendous first season of the Red Stripe Premier League," he said in a media release.

"Football represents so much joy, passion and togetherness for Jamaicans, and Red Stripe was excited to be a part of this."

The league, which was without a sponsor prior to Red Stripe's involvement, saw Portmore coming out on top ahead of a determined Boys' Town on the final day.

They achieved victory after drawing 1-1 with Waterhouse at Ferdie Neita Park, which took their points tally to 67 points, one more than Boys' Town, who on the day, overcame the challenge of Humble Lion 3-0 at the Effortville Community Centre.

"On behalf of all the staff at Red Stripe, I would like to congratulate Portmore United on winning," Gonzalez continued.

"The entire staff and team at Portmore United have truly earned the title.

"It could not have been a more exhilarating season for the fans. Portmore showed fight and determination to ensure they earned the title.

"I must also congratulate Boys' Town for a fearless challenge. You fought until the end and represented Boys' Town's heritage and the community of Trench Town proudly.

"I would also like to recognise the other 10 teams in the RSPL that all contributed to a memorable season, and made it a success."

faith in the league

Gonzalez also went on to point out that the success of the season was testimony to their faith in the league and its ability to impact the participating clubs, communities and their customers.

"When we first announced our sponsorship on November 3, 2011, we outlined our three main objectives - clubs, communities and consumers," he said.

"Operating a Red Stripe Premier League club is a huge expense and we wanted to ensure we were helping to offset some of those expenses incurred by funnelling money to the clubs through the Premier League Clubs Association.

"Our investment in Red Stripe Football Mondays was also geared at improving the professional look and feel of the league.

"We believe that by doing this, it becomes more attractive to fans and builds the value of the league, the clubs and the players."

He added: "Communities are a huge focus for us. Through our sponsorship of the premier league we engaged bar owners across the island and created a great atmosphere in the communities where everyone united around a shared passion - football.

"Our consumers responded greatly to our $100 beer specials at the games, and those at home responded tremendously to Red Stripe Football Mondays.

"This has increased the viewership on CVM exponentially where we now have the number-one show in Jamaica on Monday nights.

"Again, a well deserved victory for Portmore United. Savour the moment with some cold Red Stripe Beer, and prepare to defend your title in what will no doubt be another exciting season of the Red Stripe Premier League," he closed.