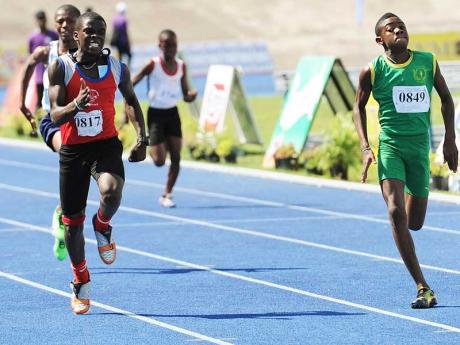 Ewarton Primary's Christopher Taylor (right) on his way to a record run of 24.02 seconds in the Class One boys' 200 metres on yesterday's final day of the Swizzzle/Institute of Sports Primary Schools Athletics Championships at the National Stadium. Tyreke Wilson (left) of Ensom City Primary was second in 24.07.-Ricardo Makyn/Staff Photographer

Floyd Coke, coach of Naggo Head, said he was very proud of his team's achievements because they worked very hard throughout the season.

"I am very happy," said Coke. "I am also very delighted even though we had some mishaps, which cost us about 30 points. However, we are just happy that local television brought this championships live to the world to show people what the primary championships is all about," Coke said.

Ewarton's Christopher Taylor accounted for the two of the six records that were broken on yesterday's final day, when he captured the boys' Class One sprint double.

Rose Lee Cooper of New Providence accounted for the third record of the meet as she sped to 13.02 seconds to win the Class Two 100m erasing the previous time of 13.03, which was held by Cardine Copeland. Kiara Grant of Bridgeport was second in (13.46) and Kayla Bonnick of St Catherine third in (13.47).