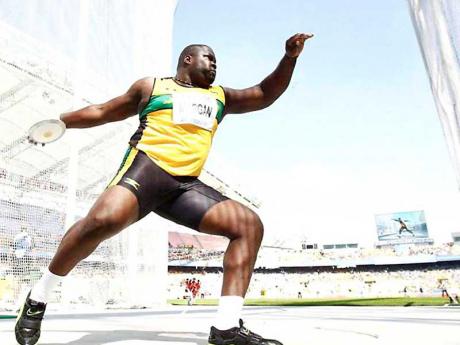 For the second time this season, Jason Morgan has shattered the national discus record. This time he might have put the record to a level where the rest of the world will also take notice.

The Calabar High old boy tossed the disc an impressive 67.15 metres to win the event at the Peak Performance Invitational in Monroe, Louisiana, yesterday. The distance - a new meet record - ranks him third best in the world this year behind Hungary's Zoltan Kovago (68.21m) and Poland's Piotr Malachowski (67.53m). It was also the farthest anyone has ever thrown in the state of Louisiana. Morgan's previous best was the 65.61m he threw on Good Friday at the Leon Johnson Invitational in Natchitoches, Louisiana.

"Thank you, God Almighty. New meet record. New personal best. New Jamaica record at the Peak Performance Invitational. I told you God controls my destiny, not human. Thankful and humble," Morgan posted on his Facebook page after the performance.

He was equally as excited when he spoke with The Sunday Gleaner as he sounded an ominous warning to the world's best throwers. "Today is only the start of what is to come. I am humble and thankful," he said. "I still don't feel the way I am supposed to feel when I make a big throw, but I am grateful for this performance because it is showing that my hard work and determination are paying off."

A man of great faith, Morgan said prior to the meet, he prayed that God would give him a preview of what is to come and He answered.

"He answered me with a 67.15m. I dedicate this to my real people, who never stopped believing in me," he said.

In addition to the divine intervention, Morgan said changing his training cycle is also beginning to bear fruit. In this cycle that sees him focusing on speed, Morgan aims to throw a personal best each month leading up to the national trials at the end of June. He also hopes to be able to uncork a 70-metre throw in time to coincide with the discus finals in London later this summer.

At the rate at which he has been progressing all year, he might just be able to get it done and bring Jamaica its first senior medal in the throws at the 30th Olympiad.

Morgan, who has been throwing against the odds of having no financial support all season long, hopes to compete again near the end of the month, somewhere around May 26 he says, before going on to New York for the Grand Prix on June 9.