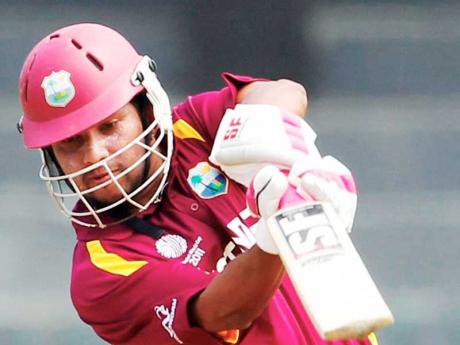 LONDON, England (CMC):West Indies batsman Ramnaresh Sarwan narrowly missed out on his second century of the County Championship as Leicestershire held on for an exciting draw against Northamptonshire on a tense last day yesterday.

Sarwan, who has not played for West Indies in nearly a year, stroked a majestic 94 as Leicestershire, set 341 for victory, finished the day at Grace Road on 289 for nine.

Resuming the day on 12 with Leicestershire on 38 for two, the right-handed Guyanese played superbly to slam 11 fours off 120 balls in an innings that lasted just over three hours.

He played with equal authority on either side of the wicket and brought up his half-century off just 65 balls.

Along the way, Sarwan put on 103 for the fourth wicket with Joshua Cobb (59) and another 73 for the fifth wicket with wicketkeeper Ned Eckersley (35), partnerships that put Leicestershire in sight of victory at 240 for four.

But Sarwan's dismissal - lbw sweeping at off-spinner James Middlebrook - sparked a collapse that saw five wickets fall for 28 runs, putting Leicestershire on the brink of defeat.

However, the last-wicket pair Wayne White (29 not out) and Matthew Hoggard (one not out) survived the last 9.2 overs in a 21-run stand to hold off Northants.

Rain washed out the second day of the match, leading to both teams making sporting declarations - Leicestershire at 38 for two in their first innings and Northants at 26 for two in their second - in order to force a result.

Northants declared at 352 for seven in their first innings.