MONDAY TALK with Jeffrey Hall - Stepping from behind the long shadow 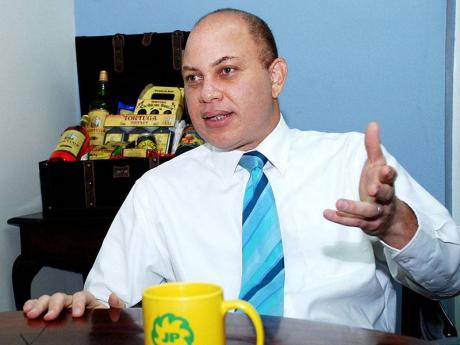 Jeffrey Hall: I got some really good breaks along the way and I have to be thankful for those times when people saw the potential or were persuaded to allow me to perform.

The first thing that strikes you when you sit down with Jeffrey Hall is the way his eyes talk. This is not the shifty nervous chatter but a steady look that is engaging but not piercing, at times looking into you but not through you.

"I find that when I sit across the table from someone, whether we're negotiating or working out a strategy, that I learn as much from them as they get what I know," Hall said.

Hall's eyes often tell you that while you are talking, he is studying every word and taking in a lot of detail.

So-called GenXers have been coming of age recently but Hall was making the big moves long ago.

"At the end of our time at Campion in the 1980s, we really felt empowered ... that there was nothing we couldn't achieve," he said.

"I wasn't the best high school student but when I read about the life of Carlton Alexander and the way he worked his way up ... . I decided that if I'm to achieve anything I'd have to work hard," he said.

Later he spoke of inspiration by association and avidly reading any business biography available.

Wall Street lapped up the young banking and securities lawyer and he was there for a time, but Jamaica wanted him more.

"Dr Gladstone Bonnick recruited me to serve as an intervention specialist. That's how I got the opportunity to, as part of a team, sit across the table from some of the big leaders of business at the time," he said.

That was at the height of Jamaica's banking crisis.

"I found myself being as challenged and interested in what I was doing in Jamaica as I was on Wall Street ... . The scale and complexity of what I had to do made me feel that it was worth the effort and the time."

Asked what defines him as a manager, Hall was thoughtful, halting, almost diffident, weighing his words carefully.

"I guess ... other people will say that I have the ability to do what is required to develop new strategy, to be strategic, that is, to identify the strategy at the macro level taking into account the effect at the local level and see to the execution."

What about toughness, the type required to negotiate in a complex environment requiring significant change?

Hall's eyes narrow in deeper thought. He uses a measured tone that gradually accelerates to his sometimes rapid delivery.

"Yeah ... we've had to be tough ... but it's important to be tough and fair and consider the effect of what we're doing."

He leans back with an open gesture.

"We don't win by raw swagger and bluster. We need to have the facts ... understand the business, make a decision and be quick about it."

That approach must have served Hall well since turning his back on a promising Wall Street career. He has always found himself in the middle of much activity, major deals and colossal change.

At age 28, he was serving on the Bank of Jamaica Board, and by age 30 he had served on several boards in Jamaica. Certainly, by age 35, Hall had served as director for numerous public and private entities ranging from JAMPRO to the Jamaica Stock Exchange.

"I got some really good breaks along the way and I have to be thankful for those times when people saw the potential or were persuaded to allow me to perform," he said.

His present assignment as managing director of Jamaica Producers (JP) began with a big break. His father, noted academic and business doyen, Dr Marshall Hall, had cast a long shadow, including 28 years at the helm of a vital part of the Jamaican economy.

That would be a strike against most people but for Jeffrey, it was motivation.

"He's one of my best friends and mentors ... a very healthy relationship with just enough competitiveness to keep me sharp."

Asking to join JP in 2001 did not get an immediate answer. In fact, the first positive indication came not from Marshall Hall, but from another life mentor, Chairman Charles H. Johnston. Since then, Jeffrey has led a transformative mission to secure JP's viability in the face of multiple hurricanes and a change in the world trade in bananas.

"The mission has been to deal with the reality where we no longer export bananas to the point where we are on our way to being a world-class speciality food company with leading brands," he pointed out.

For Jeffrey, the future means surrounding himself with competent and empowered managers who drive results for JP.

But has he any regrets?

"Only that the changes made were not done before," the astute businessman said.