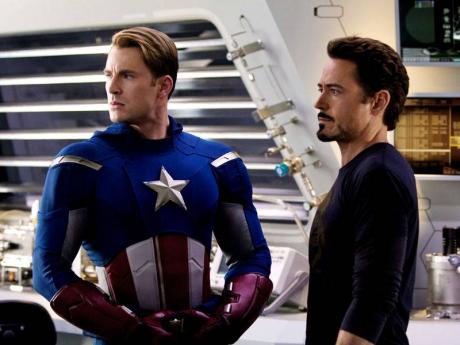 In this film image released by Disney, Chris Evans, portraying Captain America (left) and Robert Downey Jr, portraying Tony Stark, are shown in a scene from 'Marvel's The Avengers'. - AP

The Avengers is taking a page out of Superman's comic book - flying faster than a speeding bullet to the billion-dollar mark at the box office.

The superhero blockbuster took in US$103.2 million to lead for a second straight weekend, raising its domestic total to $373.2 million, according to studio estimates yesterday.

With US$95.4 million more overseas, The Avengers lifted its international receipts to US$628.9 million and a worldwide haul of just over US$1 billion, only 19 days after it began rolling out in some markets.

"You never think that it can happen this quickly," said Dave Hollis, head of distribution for Disney, whose Marvel Studios unit produced the ensemble film after a long build-up in its solo superhero outings. "You hope you can get to this day, and the fact that it is happening this early is a testament to a lot of work that went in on the Marvel side over the last six years to get us to a place where people wanted to see the Avengers assemble."

The Avengers easily fended off Johnny Depp and Tim Burton's vampire romp Dark Shadows, which had a so-so domestic start of $28.8 million to finish a distant No. 2.

That's far below such past Depp-Burton collaborations as Alice in Wonderland, which opened with $116.1 million, and Charlie and the Chocolate Factory, which debuted with $56.2 million.

Already the year's biggest hit worldwide, The Avengers is on the verge of passing The Hunger Games at $386.9 million to become the top-grossing film domestically for 2012.

Revenue for The Avengers was off just 50 per cent from the film's domestic debut of $207.4 million the previous weekend, a remarkable hold given how big it started.

A round-up of such Marvel idols as Iron Man (Robert Downey Jr), the Hulk (Mark Ruffalo), Captain America (Chris Evans) and Thor (Chris Hemsworth), The Avengers has shot past the revenues that its solo superhero predecessors took in for their entire runs. The best of those domestically was Iron Man with $318.4 million.

"There has been a surprise around every corner with this picture in terms of how high is high and how big is big," Disney's Hollis said.

Inspired by the supernatural soap opera that debuted on TV in the mid-1960s, Dark Shadows stars Depp as an 18th century vampire who is freed after two centuries of burial and returns to his ancestral homestead in the 1970s, aiming to rebuild the family fortunes.

The TV show has only a cult following, so the Warner Bros update relied on the lure of a reunion between frequent collaborators Depp and Burton taking on another otherworldly tale. But Dark Shadows left both critics and audiences cold, failing to make much of a dent in the intense appeal of The Avengers.

"Certainly, more is better, but it was a busy weekend, especially with Avengers doing $100 million in its second weekend," said Dan Fellman, head of distribution at Warner Bros. "The box office can only expand so much, and that was a hard one to anticipate. Those numbers are staggering."

Fox Searchlight's crowd-pleaser The Best Exotic Marigold Hotel broke into the top-10 in its second weekend as it expanded from a handful of cinemas to 178 cinemas. The film took in $2.7 million to finish at No. 8.

The Best Exotic Marigold Hotel features Judi Dench, Bill Nighy, Maggie Smith and Tom Wilkinson in a tale of older Brits looking to retire to a cosy life in India.

Also in narrower release of 322 cinemas, Eva Mendes' comic drama Girl In Progress opened at No. 10 with $1.4 million. The Lionsgate release stars Mendes as a nomadic single mom with a precocious teenage daughter.

The Avengers again provided the bulk of Hollywood's business. Overall domestic revenues totalled $172 million, up 23 per cent from the corresponding weekend last year, when Thor led with $34.7 million, according to box-office tracker Hollywood.com.

Domestic receipts for the year are at $3.83 billion, 17.6 per cent ahead of last year's with a huge summer line-up yet to come.

Hollywood.com analyst Paul Dergarabedian said he expects Hollywood to break the summer revenue record of $4.4 billion it set last year and top its all-time annual high of $10.6 billion from 2009.

Here are estimated ticket sales for Friday through Sunday at US and Canadian cinemas, according to Hollywood.com: