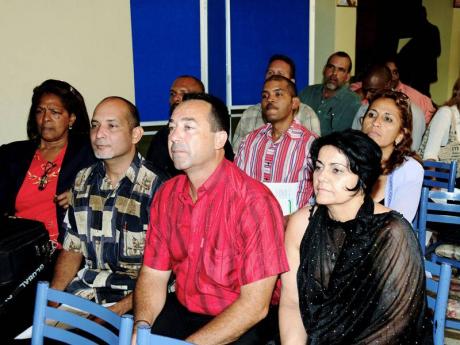 Some of the Cuban doctors who arrived in Jamaica on Tuesday May 8, listen attentively during a ceremony held at the Ministry of Health, King Street. - Winston Sill/Freelance Photographer

This one made me "Ded Wid Laugh" (DWL) as the popular lingo goes nowadays. Reason for my uncontrollable mirth was that as I watched Anderson Cooper 360o recently, I heard the bizarre story of that New Jersey mother ("Tanning Mom") Patricia Krentcil, who allegedly put her five-year-old daughter in a tanning booth where she sustained burns.

My issue is that whereas here in Jamaica, many black-skinned women and men are going to extreme lengths to bleach their skins white, this woman is risking her health to be black! Seriously guys, did you see the face? Let's just say that is no Miss America look-alike!

According to reports, the incident comes only weeks after the Mayo Clinic announced that over the last 40 years melanoma, the most dangerous form of skin cancer, has increased eightfold for young women. The study attributes the dramatic rise to an increase in the use of indoor tanning beds.

And still on the topic of some of the ridiculous things people do, it seems that when you're in love, you'll do anything to make a relationship work ... including lying about having cancer.

For Trista Joy Lathern, it sure did. The 24-year-old Texan lied about having breast cancer and then used the $10,000 raised at a benefit to get breast implants.

The reason? She wanted to save her seven-month marriage, Internet reports claim.

Not only did Lathern lie about using to the money for chemotherapy, she also shaved her head in order to look like a cancer patient.

Lathern was arrested for lying to the police about her condition, taking the charity money and spending it on the surgery.

And still on things medical, I see where we have brought more Cuban doctors into the island. I don't understand how come we are training so many doctors and our health system is so woefully short of them. I guess the remuneration in the public health sector is so meagre, after a young doctor has paid student loan, nutten nuh lef fe pay big rent, much less buy a Bimmer.

It might be cheaper to have these Spanish-speaking medics here but from past dealings with Spanish doctors and nurses, dem need to learn English. Have you ever tried talking to them while being treated by them? I had to do so for many weeks two years ago when my mother did eye surgery. I had to use sign language and all now the woman don't understand me.

Suppose this lack of clarity leads to wrong diagnosis or prescription? Might I add that no interpreter was present. We must learn Spanish, you say? That is acceptable but in a medical emergency, try teaching old, illiterate, poor people English much less a foreign language. To the Spanish-speaking doctors here in my country, I say, "Rome", you do as the Jamaicans do!