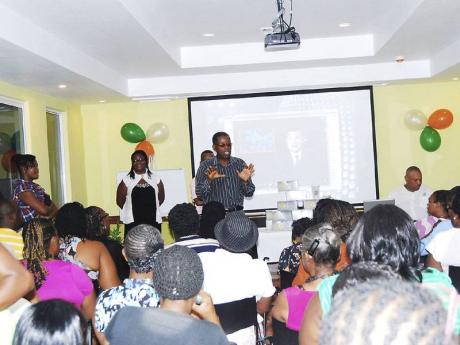 Theo Chambers, a Bios Life Slim G advocate encourages a capacity-filled audience in Montego Bay to be a part of the opportunity to change lives and create wealth with the product. 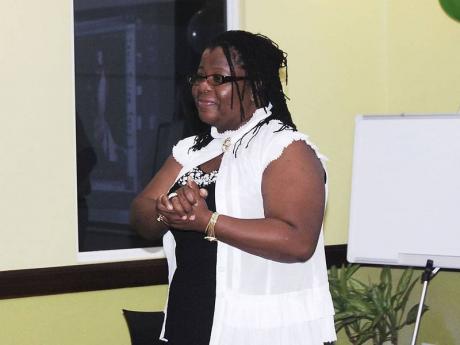 Ann-Marie Richards, promotes the use of the Bios Life Slim G product after the product worked for her in helping to stabilise the effects of her diabetes and helped her lose weight.
1
2

As many Jamaicans grapple with diabetes, one United States-based company, Unicity, is on a campaign to help persons suffering from the disease through its Bios Life Slim G product, that helps to reverse the complications of diabetes.

In addition to helping to stabilise blood glucose levels and control cholesterol, the product helps to burn fat according to the presidential saffire Owen Burrows of Unicity who operates out of the Bahamas.

Burrows, who himself is a success story through the use of the Bios Life Slim product, was among the speakers at the Impact Your Health seminar hosted in Montego Bay on Thursday at the Gloucestershire Hotel. The seminar sought to inform potential customers and distributors about the Bios Life Slim and Bios Life Slim G product, how they changed their lifestyles while generating wealth.

"Slim G has eight clinical studies which means that it is proven to work. Some of the top medical institutions in the United States of America and the rest of the world put their name and reputation behind this product. It is safe, clinically proven with no stimulants or additives, there's no side effects because it is made of natural ingredients," Burrows revealed.

The product manages and reduces the amount of glucose and sugar that goes into the blood stream after eating a meal.

It is known to reduce some the worse foods on the glycemic index scale by 30 per cent "so for persons with diabetes it makes the food that you are eating healthier than it really is. It reduces how much sugar gets in the blood and reduces the amount of insulin the pancreas makes," the Bios Life Slim G advocate told a room filled with eager customers who were willing to try the product for themselves.

Renowned broadcaster and an advocate for healthy lifestyle Barry G has joined the Bios Life Slim G campaign to help persons suffering with diabetes and weight loss to get help.

Type 2 diabetes patient Ann-Marie Richards from Clarendon, confessed that the product has in fact worked to the point where she is now a distributor.

"After taking medications for close to 21 years, I wanted to find something that would create balance in me. I was introduced to the Slim G product and cautiously decided that I was going to try it. In two weeks I lost eight pounds and my sugar level went down by half and I didn't have to take as much medication as I did before," Richards admitted.