JEEP to the rescue 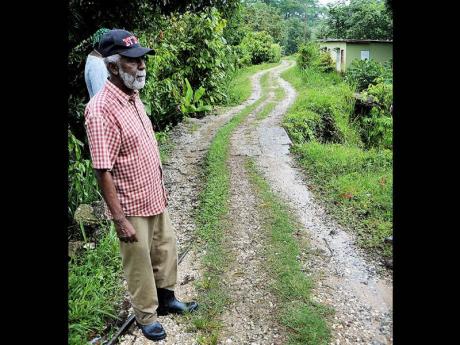 Sandy Corner resident Byron Gray stands by a pipeline which he said was once at the side of the road. The line now runs through the centre of the road, the trajectory of which has been changed due to erosion. A retaining wall is to be built at the site under the Jamaica Emergency Employment Programme (JEEP). - Ian Allen/Photographer 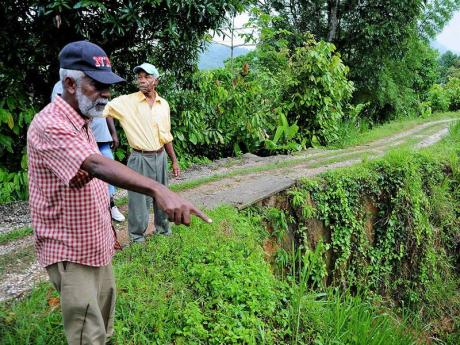 Gray points to a landslide at the side of the road in his North East St Catherine community. A retaining wall is to be built at the site under JEEP to protect the road from further erosion.
1
2

BYRON GRAY claims to have spent a handsome sum of money trying to protect the road that leads to his house in Sandy Corner, North East St Catherine.

He says for more than a decade water that rushes down a slope in the community whenever it rains has eaten away at the road.

"I have built a stone wall there, extended the stone wall, I have built two retaining walls and the water took away one," Gray said.

"I have spent a considerable sum of money on that place and trying to maintain the road way as well," he added.

Sandy Corner is a small district in Cassava River, Glengoffe. It is home to about about a dozen families.

Acknowledging that the breakaway at Sandy Corner is in need of urgent attention, Member of Parliament (MP) Gregory Mair has included it in a list of projects to be undertaken under the Jamaica Emergency Employment Programme (JEEP).

Drop in the bucket

Under the first phase of JEEP, MPs are allocated $10 million to spend on projects that will create short-term employment within their constituencies.

"I need to build about 30 or 40 walls in my constituency. Ten million dollars can't do much, so I had to go for those four little walls," he said.

"I am not going to use the money to do any form of crash programme. I am going to use it to do infrastructure, which are well needed in the constituency," the MP added.

Despite the disclosure by the JEEP secretariat that a subcontractor, Construction Solutions, has been identified to undertake the project in Sandy Corner and other areas of the constituency, Mair can't wait for them to get off the ground.

"I need to start those projects but there's no money," the MP said.

"I followed up with the NWA (National Works Agency) last week and they told me they have no funds at this time," Mair said.

This programme is under the same JDIP (Jamaica Development Infrastructure Programme), it just has another name.

But Lucille Brodber, project manager for JEEP, told The Gleaner that no such woes exist.

"I don't know about unavailability of funds," Brodber said, while adding that Mair should seek to contact her for guidance in relation to the projects in his constituency.

In the meantime, as the hurricane season fast approaches, North East St Catherine constituents such as Gray are watching the skies and fearful of the impact adverse weather conditions could have on their lives.

When The Gleaner visited Sandy Corner recently, Gray along with elderly resident John Ferrant showed our news team trenches that had to be dug to protect their dirt pathway from run-off.

Gray, who has been waiting a long time for deliverance told, The Gleaner that the fact that stones and river shingle were dropped off in the community to undertake the work gives him some degree of confidence that the problem will be addressed.

But he won't celebrate until the job is done.

"I have had the experience to have seen material dropped off and taken away, but I hope that is not what is going to happen now," Gray said.

In the meantime, the MP is hopeful that when the projects commence, members of the constituency will be able to gain some form of useful employment.

"The good thing about walls in comparison to roads is that walls are highly labour intensive ... anything that can create labour is more than welcome."

Mair said: "The need for employment is so great, I guess it's better than nothing."