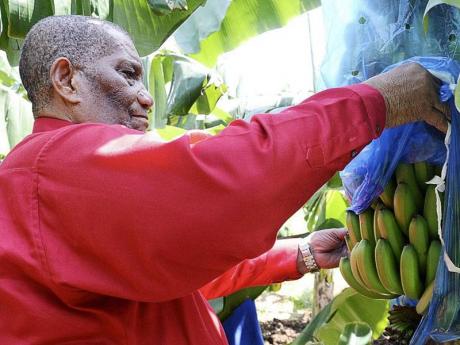 IS ROGER Clarke a farmer or a woodcutter? We really wonder. Sure, he is one of the largest producers of sugar cane on the island, but the slaughter to which he has agreed to subject the agriculture sector this fiscal year is mind-boggling.

If the Standing Finance Committee of Parliament does its work properly starting Tuesday, it should notice the 67 per cent reduction in the capital budget for the Rural Agricultural Development Authority (RADA).

The estimates of expenditure for 2012-2013 tabled in the House of Representatives last week by Finance Minister Dr Peter Phillips show that the capital budget for RADA has been chopped from $118 million last fiscal year to $39 million this year.

The capital budget for RADA is used to provide subsidies to small farmers in the form of seeds, seedlings, pesticides, tools equipment, farmhouses and water tanks. The budget also supports the training of farmers, the aim of which is to assist in increasing the productivity and improving the standard of living of small farmers.

It is a known fact that small farmers comprise the majority of Jamaica's agricultural sector, many of whom are ill-equipped and without the requisite capital to make a decent living.

We are not making an argument for the use of taxpayers' money to subsidise farmers to form fool. We feel, however, that the Government has an obligation to assist struggling farmers with agricultural inputs. That is one sure way of breaking inter-generational poverty, reducing unemployment and enabling Jamaica's food safety.

The Gavel notes, with dismay, that the capital budget for RADA has been cut by $99 million in two years. And it makes no sense Clarke points to an increase of the recurrent budget from $153.7 million to $170.8 million. That money is to pay bills and for general administration of the authority.

This is shocking, especially when one considers Clarke's declaration that enemy No. 1 for his administration is idle lands. One wonders if the signal being sent by the Government is that the troop that will eventually occupy and farm those idle lands will be people with deep pockets who can afford SUVs onto large tracks of lands.

Clarke must indicate, clearly, the method to such madness.

But it is not only in the area of agriculture that The Gavel has seen worrying proposed budget cuts. The Youth and Culture capital budget indicates that the Government has shelved plans of building the Youth Information Centres that have been long promised to the nation's youths.

To the best of our knowledge, all the centres have not been built, yet not even a penny has been set aside in the budget for these facilities.

In January, Lisa Hanna, the minister of youth and culture, announced that the Inter-American Development Bank will be spending US$11 million to fund the development of a youth information centre and National Youth Service training facilities in Spanish Town, St Catherine, and May Pen, Clarendon.

"The youth is a critical population and faces many challenges. Persons under the age of 30 commit 75 per cent of Jamaica's crimes, much of that percentage is unskilled or has not passed a single subject. I have also taken note of Clarendon, St Catherine, St Andrew, St James and Kingston, the five parishes where crime is rampant. That is why it is important that these two centres are constructed in Spanish Town and May Pen," Hanna said at the contract signing.

We refuse to continue applauding announcements and contract signings. We want to see concrete pouring. We acknowledge that it takes cash to care, and the Government, based on the budget it presented, has given us no reason to feel the project will be completed before the end of the this fiscal year, as was promised.

There is an urgent need for Minister Hanna to explain to the young people what her government intends to do in relation to the Youth Information Centres.

We beseech the Standing Finance Committee to seek answers on behalf of the country's youths.

There is also a need for urgent answers on the portfolio responsibility of Dr Wykeham McNeill.

Prime Minister Portia Simpson Miller needs to indicate whether the ministry headed by McNeill is still called Tourism and Entertainment.

In the estimates of expenditure, we notice it is only referred to as the Ministry of Tourism.

Most Jamaicans will recall that former Prime Minister Bruce Golding stripped Rudyard Spencer of portfolio responsibility for environment and did not tell him.