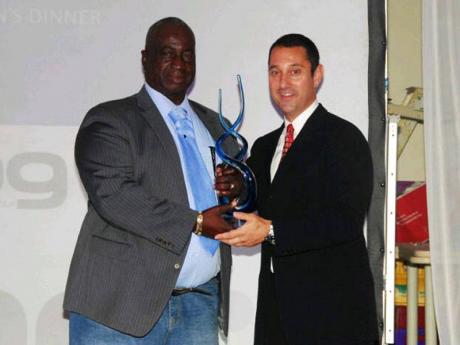 Rudolph Reese (left), Shell Spanish Town Road winner of the Chairman's Awards 2011, presented by Jonathan Blue chairman and CEO, The Antilles Group, a Shell licensee. The presentation was made at the Dealer Summit 2012, under the theme 'People Powered By Performance', held at the Breezes Runaway Bay Resort & Golf Club in St Ann last Thursday. - Contributed 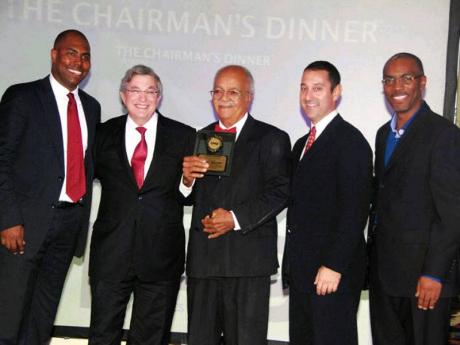 The function, held to recognise outstanding contribution of Shell dealers to their community and to the brand, also paid tribute to long standing dealers, with Artie Phillips, of 5 Caledonia Road, Mandeville, leading the way with 51 years.

In making the call for the President's Award, chief judge, The Gleaner's Pubic Affairs Editor Barbara Ellington, said the top three - the other two being Old Harbour Shell and The Horseshoe, of Upper Waterloo Road Shell - were "super shining stars for the Shell brand".

With the standards of similar international competitions being very high, Ellington said the competition was challenging but the three were clear winners.

"The signature courtesy service was evident at all three locations," Ellington said. "By giving back to their communities in tangible ways, these three are putting their money where their mouths are," she added.

The announcement of Reece as winner was greeted with rousing applause and Reece was humble in accepting his trophy and cheque for $100,000. The runners-up each collected $50,000.

Meanwhile, TAG Chairman and Chief Executive Officer Jonathan Blue, in praising the team, said he had never seen such a passionate group of workers. He said that passion was one of the things that attracted him to the company.

Guest speaker, Dr Nsombi Jaja, said it is important at all levels to create a vision for the company, which should be shared by the team. She also urged the company to put more effort into promoting the benefits to motorists who use Shell V-Power gasolene.