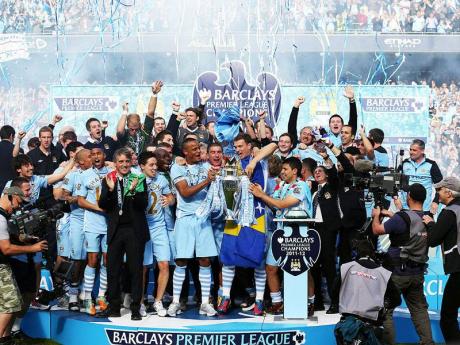 Aguero, the son-in-law of Argentine great Diego Maradona, scored during the fourth minute of injury time, two minutes after substitute Edin Dzeko made it 2-2.

The winning goal snatched the trophy from defending champions Manchester United on goal difference. Without Aguero's startling goal, United would have won the title after their 1-0 victory over Sunderland moments earlier on the final day of the season.

"I don't think I've ever seen a finale like this," City manager Roberto Mancini said. "We didn't deserve to lose. We had a lot of chances and we deserved to win the game and championship. It's fantastic for the club and the supporters after 44 years. It's been a crazy season and a crazy last minute."

It was the first time the English title was decided in such dramatic circumstances since 1989, when Arsenal and Liverpool finished even on points and had the same goal difference. Arsenal won the title on total goals.

City won the title for the first time since 1968 after overturning the eight-point lead United held five weeks ago. The two Manchester rivals have traded places atop the standings all season and continued to do so until the final minutes of the final day.

City took a 1-0 lead into half-time, but then went down 2-1 after the break despite QPR captain Joey Barton being sent off in the 55th, leaving his team with 10 men the rest of the way.

"I never stopped believing," City captain Vincent Kompany said. "When Edin scored that goal, it reminded me of so many other moments during the season when we've done this before. There was no reason not to believe.

"It's not sunk in yet. I don't know what happened at the end, it was just a huge mess."

Pablo Zabaleta put City in front in the 39th minute, but Djibril Cisse tied it for QPR three minutes into the second half after a misplay by Joleon Lescott. Lescott went to make a simple headed clearance, but instead knocked the ball backward and Cisse seized on the defender's mistake by driving a shot past Joe Hart.

Barton was then sent off for elbowing Carlos Tevez, but Jamie Mackie managed to head the visitors in front in the 66th.

City's expensively assembled squad had been facing their first loss at home since December 2010, but Dzeko sparked the recovery by heading in a corner kick in the second minute of stoppage time.

There was still time for one final moment of drama in an unpredictable season when Aguero drove home the winner. As the final whistle blew, thousands of City fans poured on to the field and blue smoke wafted around the stadium.

Winning the title is the result of more than a $1 billion of investment by Abu Dhabi's Sheikh Mansour, who rescued a financially stricken club from ousted Thai Prime Minister Thaksin Shinawatra in 2008.

"It was really important to start winning this championship," Mancini said. "Manchester City can have a big future now.''

The field was covered in confetti from the start and all the action was in QPR's half, although the hosts couldn't find the goal against a relegation-threatened club.

Yaya Toure fired over and David Silva struck tamely at goalkeeper Paddy Kenny before news filtered through of Wayne Rooney putting 19-time champions United ahead at Sunderland and top of the standings.

QPR haven't won on the road since December, but it wasn't all bad news for the London club - they avoided relegation after Bolton were held to a 2-2 draw at Stoke.

In Sunderland, United's players left the field stunned by what had unfolded. Fans looked at each other in disbelief and stood with hands on heads in bewildered silence.

"It's a cruel way (to lose the title)," United manager Alex Ferguson said. "We've experienced many ups and downs in the 25 years I've been here, most of them have been great. We've won the title three times on the last day; today we nearly did it.

"I'd like to say on behalf of Manchester United, congratulations to our neighbours - a fantastic achievement to win the Premier League."