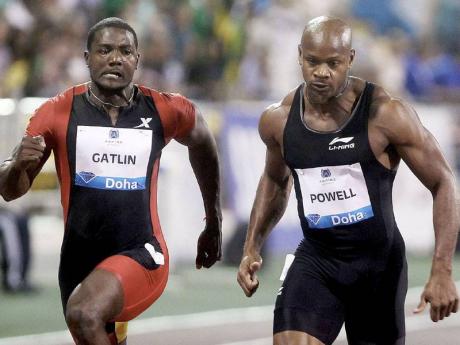 Running his first 100m of the season at the opening meet of the Diamond League in Doha, Qatar, Powell led for the majority of the race, but Gatlin stuck with him and came through at the end to nip it on the line.

The American even had time to look across to the left, as he crossed the line in a time of 9.87 seconds to Powell's 9.88.

"It would have been an easy race for me if I had got here a few days earlier, but I was jetlagged and felt that in my legs," Powell was quoted as saying by the United Kingdom newspaper The Guardian. "This will never happen again. Never again," he reiterated.

However, Gatlin, who returned to the scene in 2010 following his four-year ban after failing his second doping test, dismissed Powell's argument.

"Never again? I guess he (Powell) would have to say it seven times, because I've beat him seven to three," Gatlin stated.

He added: "Races like this show who's a competitor and who's just a runner."

The 30-year-old Gatlin made it to the semi-finals of the 2011 World Championships and has followed that with gold in the 60 metres at the World Indoor Championships earlier this year, as he continues his revival in the sport.

"I've got a lot of grit left in these old legs and now I want to come back and show I can run to the line with the best of them," Gatlin expressed. "This is just one step, but it's a very important step to get to that podium in London. I'm just ready for it."

The 9.87 has been Gatlin's fastest time since returning from his latest ban. He believes his feat is even more impressive than that of Olympic champion, Usain Bolt and World Champion, Yohan Blake, who both posted their quickest season openers over 100 metres earlier this month.

Bolt recorded his fastest ever season opener of 9.82 seconds at the JN Jamaica International Invitational in Kingston, Jamaica while Blake posted his best ever opener of 9.84 at the Cayman Invitational.

"Bolt and Blake have opened up with 9.8 on home turf, but I'm far away from home and this shows I can run very well anywhere round the world," Gatlin reasoned.