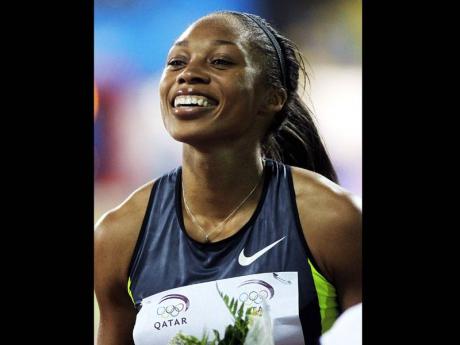 Allyson Felix of the United States celebrates after winning the women's 100m at the IAAF Diamond League in the Qatari capital Doha, on Friday. - AP

Allyson Felix has added a twist to the double talk. After months of indicating she might add the 400 metres to her signature 200-metre race at the London Olympics, Felix raised the possibility of a different double Sunday, saying she's also considering running the 100 metres.

Coming two days after running a personal-best 10.92 to win the 100 at the season-opening Diamond League meet in Doha, Qatar, this was no small bit of news from one of the world's best sprinters.

"It's definitely one of my possibilities," Felix said at the United States Olympic Committee media summit. "Since my last race, people actually believe me. I'll run the 200 for sure and then I'll see ... whether I'll run the 100 or the 400."

The decision will be made closer to the Olympic trials, set to start June 22 in Eugene, Oregon. As always, Felix said her coach, Bobby Kersee, will have final say.

Felix has been intrigued by the challenge of doing both the 200 and 400, a rare combination for sprinters, and she ran both events at last year's World Championships as a test ahead of London.

She won the silver medal in the 400, but the longer distance left her fatigued and likely cost her a fourth straight title in the 200. She didn't have her customary surge at the end of the race and wound up third, a stunning finish in the distance she's dominated for much of the last decade.

Felix is desperate to win an Olympic gold in the 200 after coming up short twice and she doesn't want anything to jeopardise what could be her last chance in London.

"Sometimes you can spread yourself too thin," Felix added. "For me this year, I just said, 'OK, the 200 is my main focus.' If I do another event, it's going to come second to that."

"If the events were reversed, it really wouldn't be a question for me," Felix said. "My favourite event would be first, and anything else would just be icing on the cake."

And while Felix is often overlooked in the 100 metres - it seems more like a warm-up for her 'real' event - she reminded everyone Friday that she can be a real threat at the distance.

She beat Jamaican rival Veronica Campbell-Brown for the first time in the 100, finishing .02 seconds ahead of the two-time Olympic champion in the 200 metres.

Shelly-Ann Fraser-Pryce, who won gold in the 100 metres at the Beijing Olympics, was third.

Fellow American Carmelita Jeter has the season's best time in the 100 at 10.81 seconds.

While it's always nice to start the season with a victory, Felix said she was most pleased to see the results of the work she's been doing on her starts, long her weakness in the 100.

"I've always put myself at a deficit from the beginning, so I think I was just more shocked that finally, I'm solving all this," she said. "I've worked a lot on that portion of the race and to finally see it paying off is a cool thing."