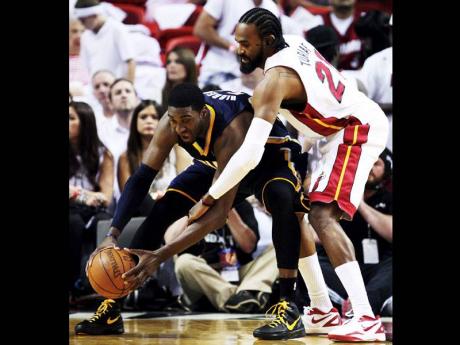 Indiana Pacers centre Roy Hibbert of Jamaica (left) and Miami Heat centre Ronny Turiaf battle for the ball during the second half of Game One in an NBA basketball Eastern Conference semi-final playoff series yesterday in Miami. The Heat won 95-86. - AP

LeBron James scored 32 points and grabbed 15 rebounds in his first game as a three-time MVP, Dwyane Wade finished with 29 despite struggling from the floor and the Miami Heat beat the Indiana Pacers 95-86 in Game One of their Eastern Conference semi-final series yesterday.

Chris Bosh scored 13 points for Miami, but left late in the first half with a lower abdominal injury and did not return. The Heat outscored Indiana 25-16 in the fourth, with Wade and James combining for 22 of those points.

David West and Roy Hibbert each scored 17 points and combined for 23 rebounds for the Pacers, who got 10 points each from Darren Collison and George Hill.

Game Two is tomorrow in Miami.

Meanwhile, Pau Gasol was consumed by determination, holding off Kenneth Faried with one arm and relentlessly tipping the ball at the hoop with the other in the fourth quarter of Game Seven. One, two, three, four - five! - offensive rebounds later, the ball finally surrendered and dropped through the hoop.

A few minutes later, the truth was as undeniable as that seven-foot Spaniard. Although the Nuggets drove them to the brink of playoff collapse, the Los Angeles Lakers still have the tenacity to win on the biggest nights of the post-season.

Even when Kobe Bryant doesn't lead them.

Gasol had 23 points, 17 rebounds, six assists and four blocked shots, Metta World Peace scored 15 points in his return from a seven-game suspension and the Lakers outlasted Denver for a thrilling 96-87 victory on Saturday night to win their first-round series.

Steve Blake scored a playoff career-high 19 points and Bryant had a quiet 17 points and eight assists against regular double-teams for the Lakers, who blew a 16-point lead in the second half before surviving a finale with wild momentum swings and furious physical play.

With Gasol leading the Lakers' emotional effort - exemplified by those five offensive rebounds on a single, unbelievable tip play with 7:10 left - the Lakers narrowly avoided becoming the ninth team in NBA history to blow a 3-1 series lead.

"We were aggressive," Gasol said. "We attacked the paint better. We pounded the boards as hard as we could, every single time. ... Our backs against the wall also had something to do with it."

Andrew Bynum had 16 points, a career play-off-high 18 rebounds and six blocked shots for Los Angeles, which must open the second round tonight in Oklahoma City against the second-seeded Thunder.

Ty Lawson and Al Harrington scored 24 points apiece for the sixth-seeded Nuggets, who committed 19 turnovers and managed just 7-of-27 shooting in the fourth quarter. Arron Afflalo scored 15 points in just the third Game Seven in franchise history for the Nuggets, who have lost in the first round in eight of the last nine postseasons - but never with this much excitement.

"Tomorrow or the next day, when the funk gets out of your body, you're going to be proud of them," Denver coach George Karl said. "I've never been in a locker room at the end of a season where every guy in front of me, I'm happy with and I'm content with. ... The game was so physical. I think their size won over our speed."