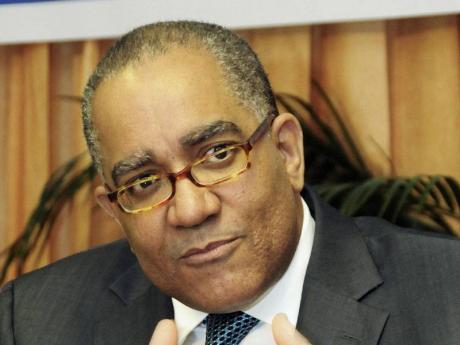 The quarterly comedy act starring our BOJ governor reopened on May 9.

During January's show, Gov said: "Domestic inflation is projected to be in the [1.0-2.0% range] for the March quarter ... . Underpinning this ... is the forecast decline in imported inflation supported by relative stability in the exchange rate".

His May encore was tweaked: "The Bank is forecasting inflation in the [1.5-2.5% range] for the June quarter ... . [This] assumes imported inflation, domestic inflation expectations and capacity conditions will be relatively stable ... ."

January's assumptions were imported inflation "decline" (really?) and "relative" exchange rate stability ("relative" to what?). Both were merged in May ("relatively stable") but second-quarter predictions were up. Why?

Why "assume" (making you-know what of 'u' and 'me') when readily available data can guide credible forecasts? Take "imported inflation". Unlike Jamaica's fictional Consumer Price Index (CPI), US CPI, representing price changes of all goods and services consumed by urban households, including user fees and sales/excise taxes paid, is reliable.

Based on America's average annual CPI, 2005 inflation was 3.4 per cent, a 15-year high. That should've tipped off local experts that recession was imminent. Instead, we were reassured:

"Don't worry about a thing,

'Cause every little thing's gonna be all right."

Worse, rather than projecting confidence, he mimics the average bureaucrat (most of whom have never seen a fence they don't enjoy straddling) hedging his bets by blaming (in advance) Budget "measures that may be announced". But the finance minister has telegraphed that the Budget, only days away, includes tax increases. Why is Gov hemming, hawing and hedging?

The Budget wasn't his only excuse-in-advance of apparently anticipated failure. He worried that inflation projections "could be exacerbated by higher-than-anticipated oil prices if there's a resurgence in geopolitical tensions ... ." What's YOUR anticipated oil price, Gov? Will there be tension resurgence? Don't leave us hanging; dependent on Wolf Blitzer.

Despite the recent appointment of a less-hawkish Israeli deputy prime minister, it's still an American election year. Tensions will escalate. Come on, Gov, earn your big bucks. Get off the fence. On May 7, America dampened recent optimism by insisting Iran take "urgent, practical steps" to prove its sincerity regarding compliance with nuclear weapons non-proliferation obligations. The EU, urgently needing its own political distraction, brusquely demanded Iran suspend uranium enrichment. Unsurprisingly, President Mahmoud Ahmadinajoke responded something like, "Over my dead body." That might yet be arranged.

Gov, were you aware of these developments when, two days later, you floundered in pedantic waffling about chances of "geopolitical tensions"? Everybody knows oil prices aren't driven by normal market forces but almost entirely by speculation (currently at an all-time high). Don't be surprised if oil soon reaches US$200 per barrel. Are we prepared? Or preparing?

The US economy has sounded other warnings. First-quarter illusions of American job growth have been exposed as merely an unusually warm winter causing early spring hirings. In April, only 115,000 jobs were added, while 342,000 left the job market. Approximately 13.7 million Americans remain unemployed. That's one month, but it represents worrying trends that we, as a dysfunctional economy dependent on remittances, ought not to ignore.

This isn't the first time Gov's vision of Jamaica's economic future has proven as reliable as sand covering his head. January's predicted first-quarter growth of 1-2% was based on "relatively strong expansion in credit to the private sector from commercial banks ...", without analysis of what that credit was producing. Support for those growth fantasies was the "... recent Inflation Expectations Survey which showed an improving trend in business-sector perception of ... economic conditions". So, growth predictions are based on maxed-out credit cards and business-sector "perceptions". Seriously?

On February 19, I asked, "Where's this growth to come from?' On February 21, Gov insisted generous growth and low inflation were coming. By May 9, his optimism was muted; his predictions accompanied by "ifs" and "buts"; his growth targets reduced; and his inflation "expectations" increased. What changed?

Meanwhile, the ship of state sails along ignoring economic icebergs ahead. Our policy mix prioritises short-term employment; budget cuts for education; and a justice system starved of essential resources. Happy 50th birthday, Jamaica. It's said the first 50 years are the hardest. Afterwards, it's downhill all the way.