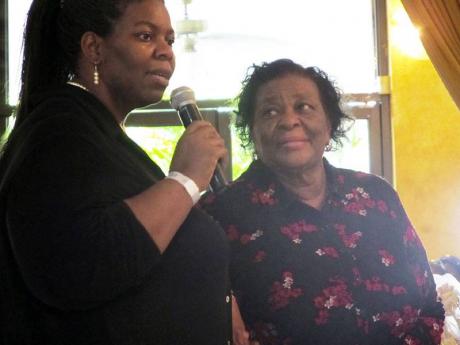 Natalie Moore, a guest at A Moment with Mom, pays tribute to her mother. 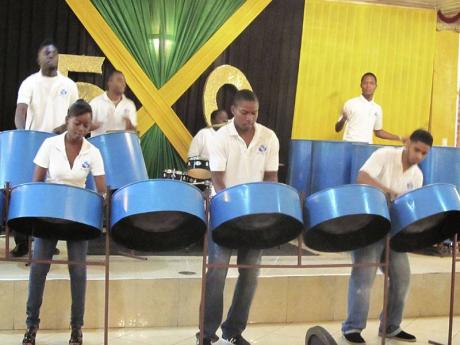 Members of the Blue Print Steel Pan Band entertain a captive audience at A Moment with Mom, held on Sunday on the grounds of the University of the West Indies, Mona, campus. - Photos by Marcia Rowe 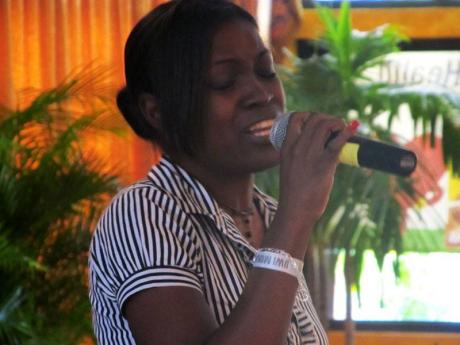 Organised by the Mona, Visitors' Lodge and Conference Centre, the elegant but informal setting saw mothers being treated to a fashion show, feted, presented with gifts and entertained with appropriately selected live and recorded music.

As mothers and their relatives made their way to their chosen tables, they were greeted by songs from artistes such as Eric Donaldson, Desmond Dekker and the Aces, and Fab 5.

Some time later, after a number of the tables, bearing bandana or gold covering, were filled the live entertainment commenced. A relatively new Blue Print Steel Pan Band was the main course of live music.

Comprising members from different educational institutions, as well as others, the band of white polo shirt- and jeans-clad musicians made three appearances.

In their first act, they delighted the diners of various ages with Go Light Your Candle. Their blue pans mounted on steel, responding appropriately to gentle touches, the band segued into the sounds of Over the Rainbow. And Andrew Comrie, a member of the band played the clarinet for a lovely rendition of Stevie Wonder's I just Called to Say I Love You.

Against a detailed backdrop, boasting the shape of the Jamaica flag, the band continued to display their talent in its second act. The group had the audience rocking to Bob Marley's Don't Worry About a Thing, One Love, Redemption Song, as well Jimmy Cliff's The Harder They Come and Rihanna's Umbrella. The third act was much shorter.

There was some variety in the band's performance. It came with a solo performance from vocalist Samantha Wilmot, who included the gospel selections Lord, I Believe You and I Look To You in her servings.

Before ending her stint, the talented singer dedicated Wind Beneath My Wings and Mom, You Were Always the Perfect Friend to all the mothers. She was joined by John Comrie to sing the latter.

Made up in performance

Comrie also did a solo performance. And before his rendition of Shaggy's classic Strength of a Woman, informed his audience that his singing was not as good as Samantha's.

He was correct, but what he lost in vocal ability, he made up for in performance.

Abandoning the front of the dinning area, he moved from table to table serenading mothers along the way.

Tiffany Malcolm chose not to sing; instead, she performed the Joan Andrea Hutchinson-penned poem Rapunzel. While her performance was not as strong as the message of the poem, she was able to convey the sentiments of the poet when she berated the black-cloth doll throughout the performance.

Then there were giveaways and an unannounced fashion show.

The designs were lovely to look at. They ranged from skimpy-looking bathing suits for the females to African and Indian garments.

Some garments were welcomed with applauses.

And the classy fun-filled brunch ended with two of the diners, Wycliff Barnett and Natalie Moore, paying tribute to their mothers.

The Gleaner spoke to Moore, who said she, along with her extended family, annual visit the Visitors' Lodge because it has the atmosphere that they are looking for.

The Mother's Day event, which is in its sixth year, has evolved from a luncheon to a tea party and finally into a brunch. And according to the Lodge's sales and events manager, Debbie Gibson: "We found our signature product and we hope to keep it this way."

But they are not ruling out changes if the customers want it.