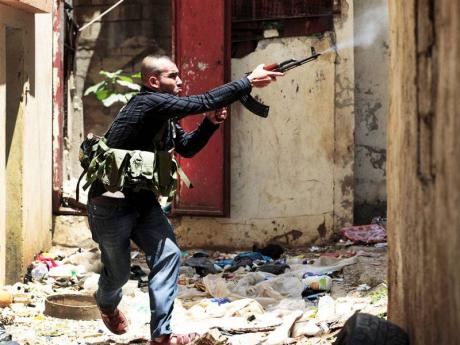 The uprising in Syria fuelled intense clashes in neighbouring Lebanon for a third day yesterday, with gunmen firing assault rifles and rocket-propelled grenades as sectarian tensions spilled across the border.

At least four people have been killed in Lebanon's second-largest city, Tripoli, since the gunbattles erupted late Saturday. Lebanon and Syria share a complex web of political and sectarian ties and rivalries, which are easily enflamed.

The revolt in Syria began 14 months ago, and there are fears the unrest could lead to a regional conflagration that could draw in neighbouring countries. The UN estimates the conflict has killed more than 9,000 people since March 2011.

Syria is overwhelmingly Sunni, but the country's President Bashar Assad and the ruling elite belong to the minority Alawite sect. The uprising has exacerbated Sunni-Alawite tensions in Lebanon, as well, sparking the clashes in the northern Lebanese city of Tripoli.

The clashes began late Saturday after authorities detained Lebanese national Shadi Mawlawi, an outspoken critic of Assad. Military prosecutor Saqr Saqr charged Mawlawi on Monday and five others, including a Qatari, a Palestinian and a Jordanian with belonging to an armed group and carrying out armed acts inside and outside Lebanon, judicial officials said. The officials spoke on condition of anonymity because they were not allowed to speak to the media.