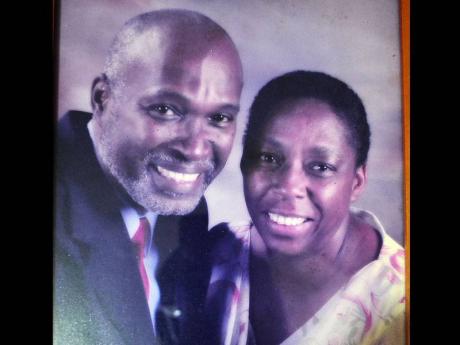 Jean Lee with her husband Charles. - Photo by Errol Crosby

She went through treatment for breast cancer last year, but has come through it strengthened and more committed to God, knowing he was at her side the entire time.

It was the prompting of the Holy Spirit that led Jean Lee, a trained teacher, to pursue examination, which later confirmed that she had cancer. This was after at least two doctor's visits and tests during which she did a mammogram and ultra sound, but the results came back negative.

Her suspicion was aroused one morning in December 2010, when she awoke and went to use the bathroom. She felt a funny sensation in her right breast and asked her husband to inspect it, but he detected nothing.

Lee, a devoted Seventh-day Adventist Christian, who surrendered her life to God in 1969, was assured then, by a number of persons that she was very much healthy and fine, because all the tests she had done concluded she was cancer free.

"Deep down, I was not satisfied. It was like something kept pushing me to undergo more tests," said Lee.

Two weeks after her last trip to the doctor, she discovered a peculiar liquid seeping from one of her nipples. The liquid was tested and finally the truth was revealed. She was diagnosed with cancer.

"Before I did anything I consulted with the Lord. He was a part of my plan," said the mother of three, who up to today has not experienced any physical or emotional pain.

Since undergoing a lumpectomy, mastectomy, chemo and radiation treatment, medical experts have seen no further trace of cancer in her system.

"At first it was very emotional for my family and friends. At one stage, I was the one who had to be consoling them. But my support network was very strong, my church family prayed for me," said Lee.

This experience has pulled her closer to God. She spends more time in worship, both at home and at the Washington Gardens SDA church. A former Montego Bay High School student, Lee is advising anyone who has been diagnosed with cancer to consult God first before doing anything.

"As the scripture says in Mark 11:23-24, 'I tell you the truth, if anyone says to this mountain, Go, throw yourself into the sea, and does not doubt in his heart, but believes that what he says will happen, it will be done for him. Therefore I tell you, whatever you ask for in prayer, believe that you have received it, and it will be yours."

Lee is convinced that: "God definitely had His hands in it the whole time."