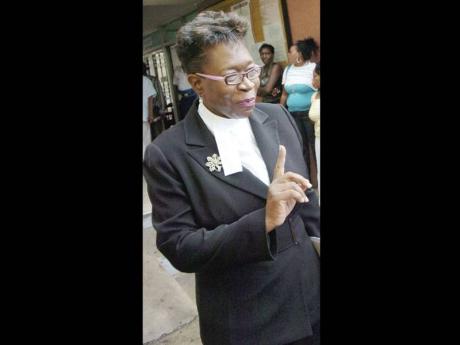 Director of Public Prosecutions Paula Llewellyn, QC, has said that there are too many cases of child abuse in Jamaica and has called on the nation as it celebrates its 50th year of Independence to stand up and assist in stemming child abuse.

Llewellyn, in calling on citizens to make reports, said, " Child abuse must be everybody's problem because the prosecutorial authority or the police do not have the power of telepathy".

She raised concerns for the safety of the children and highlighted some of the problems facing the justice system as she addressed a large gathering last week Saturday at the Riverton Meadows Seventh-day Adventist Church, Kingston.

Llewellyn said there were cases in the courts where babies and toddlers had been brutalised and killed because of lack of care or negligence. She said mothers and stepmothers were refusing to report cases of child abuse because they feel there would be a lack of financial support if the sexual offenders were charged. She said very often children were intimidated, preventing them from talking about the abuse. Sexual assaults were not gender specific because women were also abusing boys, Llewellyn said.

"Child abuse is everybody's business," Llewellyn stressed as she called on the citizens to stand up and challenge sex offenders and child abusers. She told them of the various ways in which they could report such cases.

She called on citizens to be their brothers' keepers and not become so self absorbed that they forget that it takes a village to raise a child. She said that if the adults did not speak for the children when they were abused, then they would have no one to speak for them.

She spoke of the problems the justice system was facing with jurors giving all sorts of excuses not to attend court. She said if people wanted justice for their children or neighbour then they had to be prepared to stand up and do their duty.

In referring to criticisms levelled against her at times, Llewellyn warned, "I am not going to let unfair criticisms prevent me from doing the right thing." She said she would not hesitate to apologise if the criticisms were fair and an apology was warranted.

"My responsibility is to be courageous on your behalf, and I am not going to let anybody intimidate me," she told the gathering.