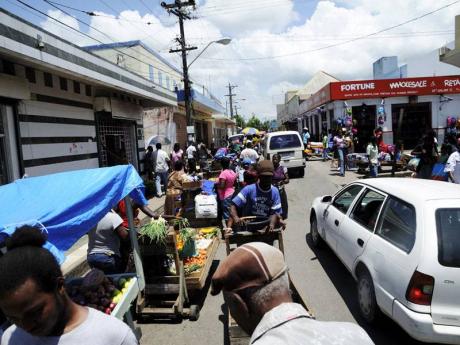 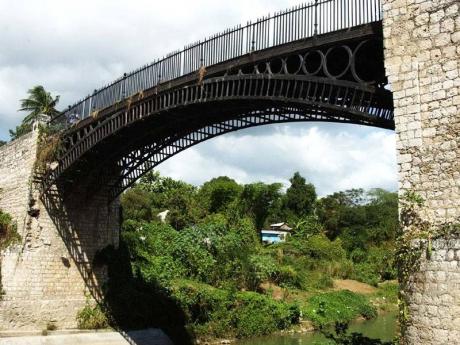 A view of the Old Iron Bridge in Spanish Town, St Catherine. - File
1
2

The foreboding clickety-clack of a rusty bicycle chain prompted me to turn around quickly. Sure enough, heading my way was a man on a bicycle. I couldn't see his face. In fact, all I could see were his legs moving up and down and a huge stack of green grass. He was carrying the grass in front of him and it was so large, there's no way he could have seen where he was going. I had to make a last-minute leap to avoid being run over.

As the man passed by, I yelled out to him. He had, after all, nearly hit me. I believe in the heat of the moment I shouted out something like, "Oy man!"

Still pedalling, he turned his head to see what the commotion was about. I told him he nearly ran me over. "Eh?" he said, still going forward while looking behind him. Then it happened. The bicycle started wobbling. The stack of grass shifted to the left and then man, cycle and grass all came tumbling down, culminating in one giant pile on the ground. I ran over. The wheels of the bicycle were still spinning and the man lay buried under the stack of grass. I moved the grass off him. He seemed dazed.

"Ah wah gwaan likkle while?" he said, rubbing his temple. I told him that he had lost his balance and really shouldn't have been carrying all that grass on the bicycle in the first place. He got up. I realised he was middle-aged and had grey eyebrows even though the hair on his head was jet black.

"Den wah meck yuh tan up inna mi way fah?" he said. I was annoyed, but because of his tumble I decided not to pursue the matter. Plus, it was the second time that something like this was happening to me, so I started wondering if I really was at fault. I asked him if he was alright.

"Yeah mi alright," he said, bringing the bicycle back to an upright position. We were on Cumberland Road in Spanish Town, St Catherine. It was packed with market vendors, handcart men and pedestrians. The man got back on the bicycle with the stack of grass and went on his way as clueless about what lay in his path as he was before the fall.

I turned around and headed up the roadway. I could see a large church in the distance. As I looked at it, a woman wearing what appeared to be an apron walked up to me. "Yuh buying any pimenta?" she asked. I told her I wasn't. She reached into a pocket on the apron and pulled out a small plastic bag and held it up. "Good pimenta, yuh know. Come from Manchester. Strang pimenta dis," she said. I told her that while that was lovely, I really didn't need any. I then told her that her shoes were rather nice. They were white sneakers with blue laces. They seemed new.

"Oh yes, is mi niece send dem fi mi," she said. I told her that was kind of her niece. "Yes man," she smiled. "Is me send har through school, yuh know. Yes man. Mi sell right here in the market and send har go high school, den UWI and now she tun big ting work into bank ah foreign," she said.

I told the woman in the apron that she should be very proud and that selling on Cumberland Road for all that time must have been rough. I mentioned how congested it was.

"Is true," she replied. "But Spanish Town nice, yuh know. It not bad like yuh might think. When mi ready mi just teck a walk over square or into di church and just relax likkle bit," she said.

We parted ways and as I walked further up the road I passed an auto parts shop, a grocery shop, a funeral parlour, a doctor's office, a lawyer's office and what looked like a bakery. I decided to walk over to the square the woman in the apron had mentioned - Emancipation Square which is one of the town's best known spots.

It didn't take me long to get there and when I did, I met Silton, an elderly man with a scraggly beard. He was leaning against a fence surrounding the old courthouse. I asked him what he was doing there.

"Well, mi just tecking it easy," he said, smiling. Silton told me he sells hand-crafted figurines at nearby Young Street but was just taking a few moments to clear his head. He had just had lunch. I mentioned to him that a woman on Cumberland Road had minutes earlier told me that she often visited the square to clear her head as well. I asked Silton what it was about the area that attracted people.

"Every town have noise and ting but we in Spanish Town glad dat at least we have our likkle cool out spot. We give thanks, man," he said.