'Our players devoted a lot of time' 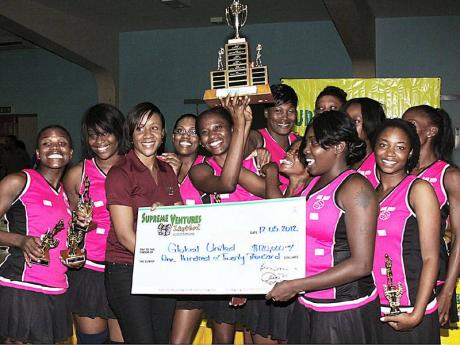 Christy Davis, manager of Global United, this year's champions of the Jamaica Netball Association (JNA)/Supreme Ventures Divisional 'A' League, said hard work and dedication were key factors to their success this season.

Global United secured their first hold on the trophy after registering a nail-biting 37-36 victory over G.C. Foster Strikers 'A' at the National Arena on Saturday.

Waulgrovians 'C' were also champions on Saturday, capturing the Divisional 'C' League title with a comfortable 35-24 win over Rivoli United 'B'.

After their 'A' League success, Davis said: "I am overwhelmed for this title. The ladies had to work very hard to win this final.

"We knew G.C. Foster was going to be a tough team to beat, but my players stuck it out right to the end and we were able to get the victory," she added.

Global United started the match very slowly as they trailed their opponents 10-6 at the end of the first quarter and 17-13 at half-time.

However, they were unstoppable in the third period as they thrilled the local spectators with their swift passing and quick, off-the-ball movements. The performance led them to outscore G.C. Foster 14-9 to take a 27-26 lead at the end of the third period.

Meleshia Josephs led the way for Global United with 31 goals from 36 attempts, as both teams traded goal for goal in the final quarter, but the champions hung on for a close victory.

Josephs received support from Kessona Francis, who netted five goals from seven attempts, and Claudia Calender, one from two.

"I think we started out very nervous in the first half, but we went out in the second half with a lot of determination and vengeance, and because we knew we were better team," Davis said.

"It was hard work because we really spent a lot of extra time on court in the nights this season and our players devoted a lot of their time to the team," she said.

Shantel Slater was the main scorer for G.C. Foster Strikers with 30 goals from 36 tries.

C. Lloyd Walker, coach of G.C. Foster Strikers, said: "I think both teams played well, but we had some domestic problems because we had a weakened team for this match."

Walker added: "However, I think that my girls played well and they gave a good account of themselves."