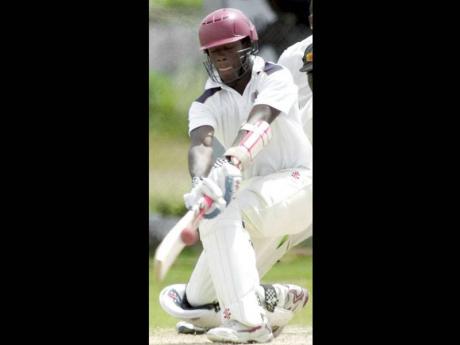 The 23-year-old, who has so far represented the West Indies in two Twenty20 Internationals, made the remarks following his knock of 159 against Clarendon at Port Esquivel at the weekend.

"My aim always is to try and make the most runs in every competition I play, and the Senior Cup is no different," said Bonner.

"However, while that is my medium- to long-term goal, my goal right now is to try and spend as much time as I possibly can at the crease each time I go out to bat."

Batting first, Clarendon were bowled out for 129, with Bonner, bowling his part-time leg-spin, claiming 2-10, and left-arm spinner, Coi Thompson, 2-29.

St Catherine CA, in their reply, made 201 for four, with another West Indies Twenty20 international, Krishmar Santokie, taking three for 34.

Clarendon, batting a second time, ended the day on 84 for seven with Thompson taking three for 16.

"I thought it was a responsible innings. As the captain, the team was depending on me to get a big one, and that I did," said Bonner, who emerged as the Most Valuable Player of the Caribbean Twenty20 tournament earlier this year.

"It allowed us to get first innings, and had we not dropped a few chances we could have gotten full points, but such is the nature of the game.

"We just have to focus on our next fixture against G.C. Foster at G.C. Foster, where we hope to get everything right."

Bonner was one three players during the round to score centuries, with Cassius Burton of last year's beaten finalists, St Elizabeth, and St Ann's Duran White, being the others.

Burton scored an even hundred against Trelawny at Manley Horne Park, while White hit 112 against St Mary at Eden Park.

There were also two bowlers who claimed 10 or more wickets in a match.

The championship continues this weekend with its usual eight matches.