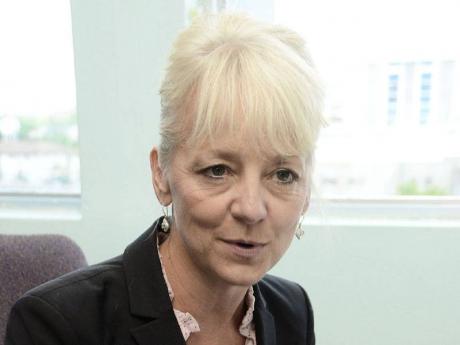 Kelly Tomblin, new CEO of the Jamaica Public Service Company, was appointed at the start of April. - Rudolph Brown/Photographer

If the Jamaican government wants to break the monopoly on electricity distribution, the best way to do it is to buy out the majority owners of Jamaica Public Service Company Limited (JPS), the utility's new CEO said Tuesday.

Liberalisation without a buy-out would send negative signals to foreign investors, JPS CEO Kelly Tomblin said in a speech to a Jamaica Chamber of Commerce (JCC) meeting in New Kingston.

"Basically, the government can buy it back from us and then they can liberalise it, and we are certainly open to that. We do not want to stand in the way," Tomblin said.

JPS's current exclusive licence has another 16-year run to 2027.

Tomblin's comments are in response to energy minister Phillip Paulwell's stated policy goal of liberalising the distribution of power to customers. Paulwell has not said how he plans to execute the strategy.

Currently, some 30 per cent of Jamaica's 820-megawatt capacity comes from independent power producers which compete to set up generation units to sell power to JPS. They, however, cannot sell power directly to customers and Tomblin advised Government to avoid breaching the JPS contract.

"I do think it would signal a lack of contract certainty and a lack of regulatory certainty," she told the JCC. "And as the minister, I wouldn't want to signal that to the international community."

The cash-strapped Government has little capacity to buy out Marubeni and East-West Power's stake in JPS.

Government wants to liberalise the sector to reduce the cost of electricity to consumers and businesses, but Tomblin argued that it would lead, instead, to higher power bills.

"It is so counter to what I have experienced in the US markets. We used to be small utilities broken down, and we found no economies of scale with workers, with systems or with technology. Then we saw those smaller distribution companies getting larger economies of scale by coming together and getting bigger and bigger," she said.

It was not immediately clear whether the petcoke plant is a redraft of a project announced four years ago as a joint undertaking of JPS and state-owned oil refinery Petrojam Limited. That project was billed as a US$300-million investment to be finalised in 2012, but it never got off the ground.

The new US$475-million petcoke plant will be pursued after JPS finalises the US$614-million LNG plant.

"We believe it makes good sense in the second phase of the project," Tomblin said.

The company will also spend US$143 million on upgrading its transmission and distribution lines; US$89 million to reduce system losses, including power theft; and US$73 million on renewables.