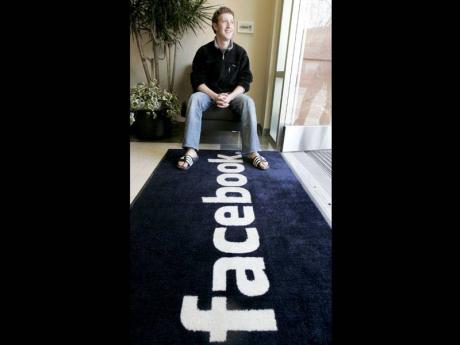 In this February 5, 2007 file photo, Facebook CEO Mark Zuckerberg sits in his office in Palo Alto, California. Zuckerberg turns 28 on Monday, May 14. He's considerably younger than the average FORTUNE 500 CEO, of course. But while some investors worry that Zuckerberg is too young to lead Facebook as a public company, experts point out that Bill Gates, Steve Jobs and Michael Dell were in their 20s when their companies had IPOs. - AP

Facebook Inc on Tuesday increased the price range at which it plans to sell stock to the public, as investor enthusiasm in the potential value of the world's most popular social network continued to climb.

The California company said in a regulatory filing that it now expects to sell its stock for between US$34 and US$38 per share, up from its previous range of US$28 to US$35.

The IPO is expected to be completed late Thursday and begin trading on the Nasdaq on Friday.

The initial public offering is the most hotly anticipated in years and would value Facebook at more than US$100 billion.

The IPO is expected to be the largest ever for an Internet company. It is expected to raise more than 10 times as much as the US$1.67 billion raised in Google Inc's 2004 IPO.

At a value of US$38 per share, the high end of Facebook's expected range, Facebook would generate US$6.84 billion on its shares. Existing stockholders would collectively make US$5.98 billion.

Facebook is selling 180 million of its shares in the IPO. Another 157 million shares are coming from existing stockholders, including the company's earliest investors and CEO Mark Zuckerberg (see list of sellers on this page).

Even after the IPO, Zuckerberg will remain Facebook's single largest shareholder. He will control the company through 57 per cent of its voting stock.

Even at the higher price range, it's going to be tough for the company's fans and everyday investors to get in on the IPO.

Most shares are expected to go to people with connections to the company or large, active accounts with one of the big banks or brokerage firms directly involved in the stock sale.

Morgan Stanley leads the team of 33 underwriters selected for the Facebook offering, followed by JPMorgan Chase and Goldman Sachs.

Analysts say there's so much interest in Facebook's stock that some underwriters are closing their books as early as Tuesday. This means they won't be taking any more orders from potential buyers.

In its Tuesday filing, Facebook also adjusted the timetable for finishing its US$1 billion acquisition of Instagram, saying it expects the deal to close sometime in 2012.

Previously, it had said it expected to complete the deal in the second quarter.

Some have speculated that the acquisition of the photo-sharing network would come under regulatory scrutiny. If the deal doesn't close by December 10, Facebook could have to pay Instagram a breakup fee of US$200 million.