Brevett's bass lines, the foundation of a national sound 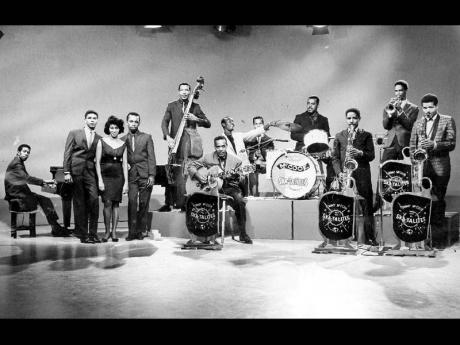 The Skatalites in earlier years, with Lloyd Brevett (fifth left) on the upright bass. - Contributed 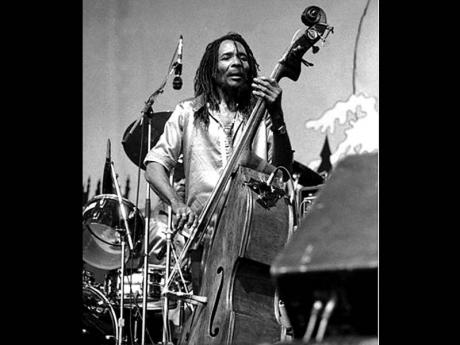 Some years ago while in Osaka, Japan, I ran into a local bassist I had known but not seen for a couple of years. On enquiring what he was doing, he responded in perfect Jamaican patois: "Right now I man ah jus play ska and African music. Me cyaah badder wit the dancehall, jus ska an African music me ah play. Yu know, ah de legend Lloyd Brevett me ah listen right now."

That legendary bassist, Lloyd Brevett, was best known as a member of the equally celebrated Skatalites.

By the admiration of my Japanese friend and many more like him around the world, Brevett's contribution to Jamaica's popular culture is secure. It is immeasurable when one considers his countless recordings and performances during a career that lasted more than 50 years and that encompassed everything, including mento and jazz, but especially the music he was a part of innovating - ska.

Brevett and the band he was a part of founding, The Skatalites, gave Jamaica and the world a music that has since spawned a movement unimagined at the onset by its creators. I doubt that when Brevett and The Skatalites were part of that creatively innovative moment that produced ska it ever crossed their minds that so many years later in Japan, Eastern and Western Europe, the United Kingdom, North and South America - all territories in which The Skatalites eventually performed - that they and the offbeat rhythms they created, would mean so much to so many and that the approach to bass playing developed by Lloyd Brevett would be the foundation of a national sound that was emulated across the world.

More than once this musician told me how he got started. Brevett was born in West Kingston and was taught the bass by his father, also a bassist, who made his own instruments. The elder Brevett also led his own band, The Count Brevett Orchestra, during the 1940s and '50s. Under his father's guidance he developed quickly and during his formative years gigged with mento groups, including King Bravo and Lord Fly.

The young bassist played with Coney Island musicians before he joined Eric Deans' Orchestra, perhaps the island's most popular jazz and dance band at the time. It was there that he met drummer Lloyd Knibb and others, including Tommy McCook and Roland Alphonso, musicians that would form The Skatalites.

Brevett also played with Roy Coburn and the Blue Flames and at the same time with Rastafari drummers in West Kingston.

The variety of material required by this motley crew exposed Brevett to a diverse involvement with music spanning mento, mambo, meringue, swing, bebop and calypso. His association with Rastafarians gave him a musical concept and social context that helped shape his approach to the bass and his style of playing.

It was all these influences that informed Brevett's musical language - a style of playing that has made him arguably the most influential bassist in Jamaica's impressive lineage of bass players.

By the early 1960s he was among a group of musicians who regularly recorded for the top producers.

Some within this set decided to form a band and Brevett became a charter member of what some consider the greatest and most influential band ever assembled in Jamaica, The Skatalites.

This aggregation boasted some of the most esteemed instrumentalists ever assembled in one group, men whose technical skills and creative impulse were unmatched during its time. Its members were saxophonists McCook, Alphonso and Lester Sterling, trumpeters Johnny 'Dizzy' Moore and Percival Dillon, eccentric trombonist Don Drummond and its fluid rhythm section Jackie Mittoo on piano, Jerome 'Jah Jerry' Hines on guitar, Lloyd Knibb on drums and Brevett on bass.

Not only were The Skatalites an outstanding set of soloists, but in terms of rhythmic interplay, they were an inventive and innovative set of musicians much like the Count Basie Orchestra when they first arrived in New York from Kansas City in the mid-1930s, bringing with them a new way to swing the music called jazz.

Similarly, it was the Skatalites who defined what ska was all about - its rhythmic pulse and melodic cadence. The band's rousing affirmation, celebration and incantation balanced by lament and pathos represented for these musicians and their fans, an extension of the resilience, creativity and vulnerability of the Jamaican masses.

An intuitive rather than a schooled musician, Brevett's playing was no less authoritative in terms of Jamaican bass attitudes than that of his counterpart Wilbur Ware's in American jazz. Discussing the origins of the Skatalites, McCook once told me: "Ya know, Brevett didn't read, he played by ear. But he was so talented. He was just a born musician.

All you had to do was play the tune, he would just pick up from there and give it that feel."

I also asked Brevett about his inability to deal with notated music. In his straight-talking manner he lamented his shortcomings, saying he was overlooked for gigs with the jazz guys because of this even though he didn't think any of those other bassists with all their orthodoxy, had the beat or spirit to match his.

Brevett had a voracious appetite for offbeat bass lines, replete with a deep perception for propulsion, timbre, heft, equilibrium, and contrast.

His desire to remain rooted in the tradition rather than opting for cliché was what allowed him to extend the idiom because though he respected it, he was not imprisoned by tradition. He embraced it as the medium by and through which extension occurs.

Therefore, he created walking lines that were built around robust percussive drive, derived from the textural and stylistic influence of the Rumba Box.

Brevett's earthy beat was full of weight which embellished the melodic direction with powerful rhythmic swing, satire or sometimes a vamp or modal substitution as on tunes like Mesopotamia and Downbeat Burial. On songs like Roll on Sweet Don and Man in the Street the bass is prominent in the opening before settling on steady full notes that move up and down, allowing a strong rhythmic foundation for the band.

Lloyd Brevett is considered the patriarch of a long and impressive line of home-grown bassists that have established and maintained an aural identity that is distinctively Jamaican.

In that regard, enough can't be said about his influence on the Jamaican bass lineage. The breadth of his influence is felt and acknowledged both at home and abroad and his larger-than-life persona animated every stage across the world on which he performed.

Brevett's walking lines, so dynamic and inventive, added to his tone and rhythmic concept, the way he digs into the bass to find an astonishingly huge tone, his sauntering groove and his personality, all combine to convey an attitude that evokes the freedom, optimism, creativity and resilience of the Jamaican people.

The effect of rhythm conveyed through Brevett's lines prefigured the pulsating brilliance of Jackie Jackson, Aston 'Familyman' Barrett, the ubiquitous Robbie Shakespeare and all the others who continue a tradition, few realise germinated from and extended the lines Brevett created so long ago.

It provided them with the kind of information that they not only absorbed but elaborated on because the lessons were open-ended.

Neither Brevett nor any other member of The Skatalites became wealthy as a result of their enormous musical success but they were able to be independently comfortable. And that success and independence did not happen because of their obvious creative talent alone, but also because of their psychological strength as well. As much as they played themselves to success they also willed that success. It was a thinking process.

Beyond their own earnings and popularity, musicians like Lloyd Brevett and the Skatalites enrich Jamaica by the music they gave the world.

Their innovation spanned other genres and influenced other artistes like Bob Marley, Peter Tosh and Toots and the Maytals, among many others.

The international renown of all these musicians says a lot about our history and it says a lot about Jamaica. It says, with purpose, dedication and our talent, all Jamaicans, whether rich or poor, can make it in life.

It gives us national pride and autonomy - it gives self-esteem to Jamaicans.

As cultural ambassadors, these troubadours allowed a fixed focus on our country that continues to bring cultural and economic benefits. Their success enables a reputation for Jamaicans as winners. We, therefore, feel like victors and behave like champions and that elevates the entire nation. I hope our political leaders will look at the story of The Skatalites, I hope it will inspire them to take our cultural assets much more seriously and see it as potentially the most valuable national resource.

The Skatalites' Lloyd Brevett was a great musician who accomplished many things in a career that was distinguished, long and colourful. He cut a picturesque figure and was much concerned with elegant appearance. This proud Rastafarian carried a posture that was elongated and stately, had a taste for hats like a dandy and chose suits of urbane quality.

To the music fraternity of this country that he so warmly loved, he was truly a favourite son who was also valued and admired universally. He received many citations and awards for his outstanding work in music. These awards include a Silver Musgrave Medal, The Prime Minister's Award, the Caribbean American Association Award, and the WLIB Radio Award for contribution to Caribbean culture, induction in the JAAVA Music Hall of Fame, and two Grammy nominations.

Bassist Lloyd Brevett will always be remembered for his amazing musical ability as long as fans and students of Jamaica's popular music care to pay attention to its origin.

I once heard a story about a group of friends - World War Two veterans, who bought and put away a bottle of champagne to be had by the last surviving member of the group in honour of the others.

If The Skatalites did this, Lester Sterling would be having that drink about now in homage to all the other musicians who were the Skatalites. The moral of that story is not whether the champagne would be good for drinking but that as a collective they understood that no matter their differences, life's success depends on how we value and appreciate unity, loyalty, commitment, struggle, victory, vulnerability, friendship, and mortality.

Like he used his bass to walk The Skatalites and all of us willing to make the musical journey into new experiences, he now walks away from the mortal stage to join others in the great unknown. Our loss is the gain of the band of angels. Lloyd Brevett died on May 4, aged 80, following a long illness.

Herbie Miller is the director/curator of the Jamaica Music Museum. He is a cultural historian with specialised interest in slave culture, Caribbean identity and ethnomusicology.