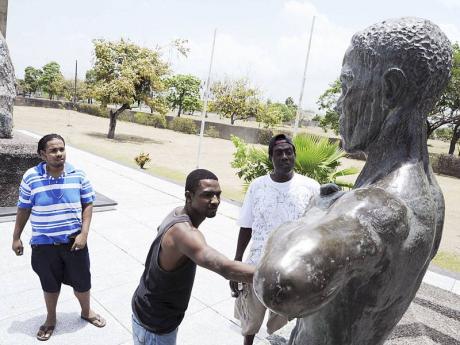 David McLean (left) and his cousin, Omar Walker (centre), and their uncle, Norman Walker, look at the bust of Paul Bogle at the National Heroes Park in Kingston yesterday. - Ricardo Makyn/Staff Photographer 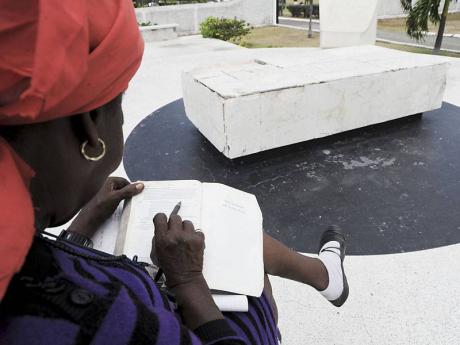 Ms Anderson reads her Bible while at the National Heroes Park in Kingston yesterday.
1
2

National Heroes Park, recently named the National Labour Day Project for 2012, is a tranquil place, almost deserted at times; but you will always find a mix of regular visitors and newcomers.

The Gleaner went by yesterday to see who was making use of the expanse on a typically sunny, windy day in May. We came across a meditating Ms Anderson (the only name she would give us), who was busily reading her Bible in the shade of Sir Donald Sangster's tomb.

Anderson said she passes through the park about twice a week as it gives her solitude to study the Word. But she was quick to voice her displeasure about the sections of the park that are in disrepair.

"Look how they do Mr Sangster grave!" she said incredulously. "What a disgrace! I know this man was a great man. They should repair it, or even keep people from destroying it."

She continued: "I don't know who would be so cruel. I wonder if that's how they treat people. They don't treat good people the way they should."

Our attention turned to three men who had been viewing the graves and taking photos with their cellphones. It turned out that Norman Walker, a Jamaican living abroad, took his two nephews, Omar Walker and David McLean, to see the park.

"I was there for Norman Manley's funeral, man. The whole park was packed from east to west," he recalled, adding that he saw Michael Manley's burial as well. "Back then, over this side (the area closer to the Ministry of Education) never had these kinds of flowers, and there were no walls around like this, but it build up now."

He loved what had been done over the years and said he would love to see Portia Simpson Miller in there when the time comes.

"This side looking good, but over there (pointing to the entrance across from the finance ministry) need some development. Unlike Walker, his nephews, both in their 20s, had never visited the landmark.

"Tell you the truth, I always pass it on my way downtown or to the Ministry of Labour, but I've never been over here before," said the younger Walker, who lives in Papine. He was impressed with the history of the place but felt more needed to be done.

"It want some more development. Some a di graves want redo, paint over. The concrete all crack up. For the national heroes who mek we reach so far, it must look better," he said. He was ecstatic that the park was the National Labour Day Project.

"Mi glad fi dat! Them deserve it," he said. McLean, a student at the University of the West Indies who is originally from Discovery Bay, St Ann, couldn't get enough of the park.

"It's all right, man," he said. "It's clean and is a nice atmosphere to just come and relax. I was just over by Sam Sharpe's tomb, and trust me, it's like mi have a different respect fi him," he said. The trio felt more could be done with the park, though, especially to bring in tourists. They envisioned restaurants, a waterfall, especially for the children, and more shaded areas for families to have picnics.

"You can set up like shops that would sell stuff like T-shirts and caps, or even cups with the heroes' faces on it," said McLean. "So then they can carry it back where they come from," the elder Walker said.

"There are so many things that they can do to make money in Jamaica. Just take the tour bus with the tourists around to this side and show them the place. Even a likkle bar, you know, so wi can sit down and chill with our heroes."