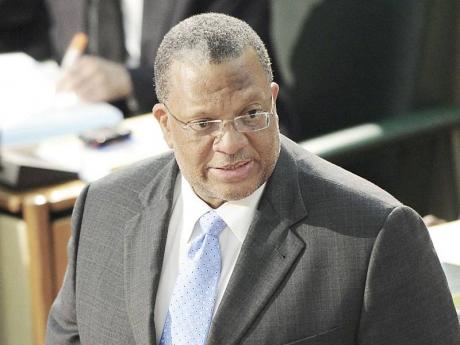 ROLLING THE pitch for what appears to be the start of a tough innings on May 24 when he makes his opening Budget Debate presentation, Finance Minister Dr Peter Phillips yesterday spoke bluntly about the crippling debt problem facing the country and urged the cooperation of the entire society in the difficult decisions ahead.

With the country gripped by a $1.6-trillion debt stranglehold, the finance and planning minister suggested the Parliament could not have its cake and eat it, too, in relation to the reduction of the country's debt while agitating for an increase in expenditure.

"As a Parliament, we can't all be for more expenditure and at the same time be for the paying down of the debt," Phillips declared during yesterday's review of the Estimates of Expenditure by members of Parliament.

The finance and planning minister contended that if steps were not taken to cut the debt, "we (would) be mortgaging the future of the country and future generations ... ."

He called for the cooperation of parliamentarians, critical stakeholders, public-sector unions, the civil service, the investor community, and the society to assist in the drive to cut the debt.

In the 2012-2013 Estimates of Expenditure, tabled in the House of Representatives last week, the servicing of the debt and the wage bill stood at about 78 per cent of total expenditure.

Phillips said the Budget would seek to address some key objectives such as ensuring fiscal and debt sustainability, reducing the country's vulnerability to external shocks, and promoting economic growth.

Time to get the economy growing

"It is absolutely imperative that we get the economy growing at a faster pace than we have achieved over the last 30 years. The foundation of that increased rate has to be laid now," he pointed out.

Phillips argued that even as the administration moved to make the necessary adjustments to accommodate the debt and undertake needed reforms, "we have to find room to protect the most vulnerable and marginalised in the country by increasing expenditure in the targeted social sectors and programmes".

He also indicated that this Budget was linked to the search for re-engagement with the International Monetary Fund and the wider capital markers, as well as other multilateral and bilateral players.