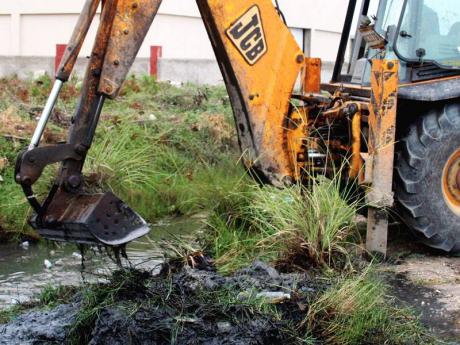 Approximately $3.5 million is needed to undertake a massive drain-cleaning programme in the Mount Industry division in North East St Catherine.

With the start of the 2012 hurricane season just over two weeks away, Donnell Marriott, councillor for the division, believes this issue must be one of priority for the St Catherine Parish Council.

"We have been making preparation for the hurricane season as it relates to the cleaning of drains. The parish council allocated a minimal amount of funding as it relates to assisting in the division, and we are expecting some more," explained Marriott.

He said $200,000 was spent over a week ago to undertake a drain- cleaning exercise along the Long Hill main road. However, he indicated that several drains in the division needed urgent attention.

"All the roads, especially those in Glengoffe which were paved six years ago and should be maintained, the maintenance has not been consistent and so the drains are now blocked. We are particularly concerned about those because they are the better roads we have, and it's best for us to save those," he noted.

He added, "The Jambos Pond road really needs to be cleaned, Lucky Hill road, that road leads from Lucky Valley to Omeally, and also that road leading from Jambos Pond down into Berry Hill. The main road from Williamsfield to Glengoffe, all the drains and culverts are presently blocked, and that, too, is of critical concern."

Additionally, he cited the urgency to clean drains running along unpaved roads in areas such as Omeally, Content and Morris Hall.

Marriott expressed disappointment with what he said was Member of Parliament Gregory Mair's decision not to place primary focus on drain cleaning through the implementation of the Jamaica Emergency Employment Programme in the constituency.

"He said that he will be concentrating on retaining walls in Cassava River and Lucky Hill. Unfortunately so, because I was really thinking that concentrating on drainage would have created more employment and also have a greater impact on the lives of the persons, seeing the condition of the major thoroughfares, mainly the Williamsfield to Glengoffe main road and Zion Hill to Free Town. Those two roads are really in a bad condition," he noted.