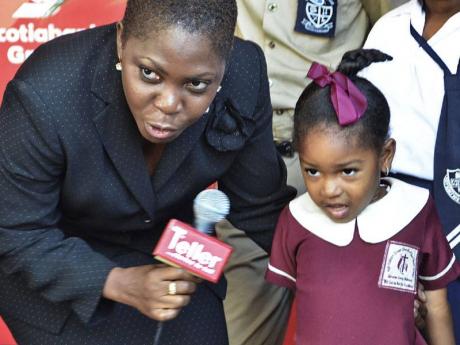 Little Rebecca Grant of Highholborn Street Church of God Basic School gets her time at the micophone as Joylene Griffiths-Irving, director, corporate social responsibility/ executive director of the Scotiabank Foundation assists her. - Contributed

Some 50 primary, basic, and all-age schools from 13 parishes recently received computers from the Scotiabank Foundation.

The computers were purchased by ScotiaFoundation in response to the many requests.

But there is more to come from the bank as this year, 50 students will benefit from bursaries and grants as part of the bank's anniversary celebrations.

"As Jamaica celebrates 50 years of Independence, 50 students will benefit from bursaries and grants as part of the bank's anniversary celebrations.

She said the bank would be presenting $5m in bursaries and scholarships to students at the tertiary level (first-degree students of local universities).

"A committee is in place to shortlist applicants from close to 200. The announcement of the 50 will be made during the summer," Griffiths-Irving revealed.

Griffiths-Irving said Scotiabank has partnered with the Camara Foundation to ensure that critical groundwork was done to assess schools which benefitted from the recent donation of 100 computers but do not have Internet access or expertise to teach the subject.

Having found some schools without Internet access, through the Camara Foundation, those schools will benefit from machines loaded with educational software, many of which will not require Internet use, she said.

"For example, The Camara Wikipedia has a specially designed proprietary wiki installed on the local hard drive of each system that facilitates detailed research on animals, plants, places, people, countries or almost anything that would require an Internet research," she said.

In some cases, schools which do not have information technology specialists don't need one because the programme focuses on training teachers to use the computers to teach mathematics, language and science. The software loaded onto the computers is designed to enhance the teaching and learning experience of both teachers and students. The machines are meant for improving literacy and numeracy and, with an engaged teacher, can yield excellent results, whether he/she has an IT background or not, Griffiths-Irving said.

Scotiabank will conduct post-installation verification exercises to ensure all computers received by the schools are being used for educational/teaching purposes and not performing administrative duties or locked away in storage.

Camara also conducts periodic monitoring-and-evaluation visits to schools to ensure conformity to its agreement with Camara regarding their use.