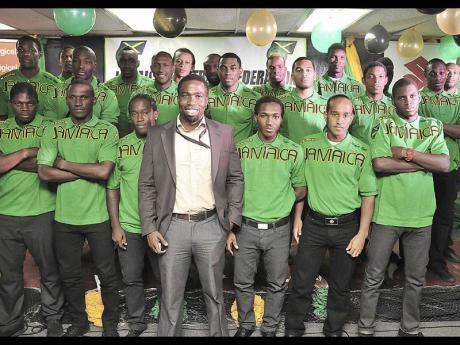 Jermaine Brown, sponsorship and events manager, Wisynco, poses with the Reggae Boyz during one of the team's shots with sponsors, during yesterday's unveiling of the squad at the Jamaica Football Federation. The Boyz are preparing for Friday's friendly international football game against Guyana, which will be played at the Montego Bay Sports Complex in Catherine Hall. - Anthony Minott/Freelance Photographer

Jamaica Football Federation (JFF) General Secretary, Horace Reid, does not believe that several new call-ups to the national squad - despite the start of the FIFA World Cup qualifiers being less than a month away - will negatively impact the Reggae Boyz as they look to assemble a squad capable of securing a spot at the 2014 World Cup Finals in Brazil.

Six new players were presented, along with the rest of the 24-man squad, for Friday's friendly international against Guyana at the Montego Bay Sports Complex, at a press conference at the JFF headquarters yesterday.

In addition to the debutants, several players were recalled, chief among them midfielders Omar Daley (Motherwell), Sean Fraser (Alianza) and defender Lance Laing (Fort Lauderdale Strikers). Also returning to the squad for Friday's 8 p.m. encounter is Jamaica's leading all-time scorer Luton Shelton, who now plies his trade for Turkish side Karabükspor. Shelton has missed the last couple of games after suffering an injury early in the season.

In total, there have been approximately 12 changes since the team last played to a 0-0 draw against Costa Rica in March, with several players - including Ricardo Fuller and Marlon King - yet to feature.

Concerns have been raised in some quarters that with the qualifiers set to begin against Guatemala on June 8, not having a definite squad could be detrimental to team chemistry.

However, from Reid's perspective, having a deep squad and several choices will be just as necessary. Also included in the squad are three players from local Premier League winners Portmore United.

"It's important that we continue to widen our pool, because the campaign is a long one and one has to always be prepared for all the different factors that can come into play," Reid told The Gleaner.

"I remember in the 1998 campaign, at a crucial stage we found ourselves with a goalkeeper crisis, and we had to use a debutant in the goal. So it is always important to widen that pool; everyone won't play at the same time.

"The search for talent is always ongoing, it keeps all the players on their toes, it keeps the squad fresh and it keeps everybody focused once there is competition in the squad," Reid pointed out.

In addition to Guatemala, the Reggae Boyz have been drawn in Group A alongside Antigua and Barbuda and regional powerhouses the United States.