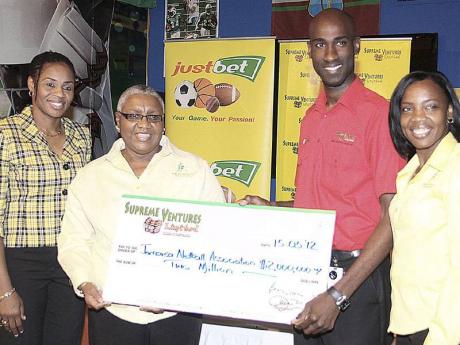 Jamaica's new-look Sunshine Girls will parade their skills before their home crowd next month when they take on world number six-ranked South Africa in three Tests during the Jamaica Netball Association (JNA)/Supreme Ventures Sunshine Series 2012, which was launched yesterday morning at the Acropolis, Barbican, with the title sponsors commiting $2 million.

All matches will be played at the National Indoor Sports Centre.

Prior to the Test series, the South Africans will open their tour with a match against Jamaica's Under-21 team on Thursday, June 14 at the University of Technology (UTech), starting at 6 p.m.

After last year's World Netball Championships, a number of senior players retired from the Sunshine Girls unit, paving the way for new entrants to the team.

"Having this series at home is the first stop in the journey on the Road to Sydney Australia for the 2015 WNC and is the first showing at home of the new-look team under coach Pitterson," said Marva Bernard, president of the JNA.

Head coach Oberon Pitterson-Nattie and captain Bryan, who spoke at the launch, both promised a competitive series from the world number four-ranked Jamaicans, whose team has been in serious training for the upcoming matches.

Carlene Edwards, senior corporate communications officer of title sponsors SVL, announced her company's continued commitment to the growth and development of the sport in Jamaica.

"We at Supreme Ventures see netball as important to the development of our country, and so we continue to support its success at the club level, as well as at the national level," she stated.

Edwards also announced that Supreme Ventures will support the staging of the series in other forms, such as picking up the cost of the launch and other indirect expenses.