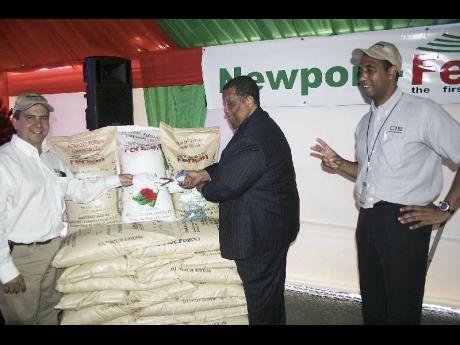 Christopher Gentles (right), director general of the Coffee Industry Board, smiles his approval while mimicking the action, as Roger Clarke, minister of agriculture and fisheries, prepares to cut the ribbon on a portion of the fertiliser being donated, with the help of Dennis Valdez, managing director of Newport Fersan Limited, which manufactured it. - photo by Christopher Serju

The Coffee Industry Board (CIB) is soon to begin distribution of fertiliser to between 5,000 and 6,000 registered farmers through licensed coffee dealers. This follows the delivery of 12,000 pounds of the product, valued at $20 million, as part of the $29-million grant for inputs promised to the sector by Agriculture Minister Roger Clarke. The other $9 million, yet to be delivered, will be in the form of chemicals to combat the coffee berry borer.

The fertiliser, produced by Newport Fersan Limited, was handed over on Thursday at the company's Wherry Wharf complex at Newport East, Kingston. Dennis Valdez, managing director, Newport Fersan, said that special additives and enhancers had been added to the fertilisers manufactured for the coffee sector at no additional cost.

"This will further increase already expected high yields for the benefits of those farmers who produce the best coffee in the world," Valdez told the handover ceremony.

Christopher Gentles, director general of the CIB, who witnessed the handover, said that only genuine farmers registered with the board and who had maintained an average production of at least 50 boxes per annum over the last three years would benefit. He described the donation as overdue and well appreciated, given the many challenges, in recent times, which had led to a significant decline in coffee production.

Although this is a little better than the original projections, it is one of the lowest output in years, with some farmers producing as little as 25 boxes per acre on average, down from 56 boxes.

Meanwhile, the agriculture minister reiterated Government's commitment to supporting the coffee industry. He told the ceremony: "We have had marketing problems. We had a disease problem, but we cannot give up on that industry because we produce the best coffee in the world, and we have to make sure that we bring these coffee farmers back into the limelight ... ."