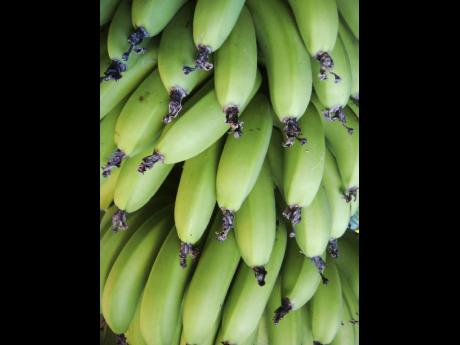 "Presently, sugar, citrus and other commo-dity bodies are being offered interest rates at a maximum of five per cent. The banana growers have been lobbying all of last year in order to get similar interest rates so as to be able to resuscitate their farms and, in a lot of cases, to extend the acreage. However, the lending agencies, primarily the PC banks, are holding out and are only offering us somewhere in the region of eight per cent," Session told The Gleaner recently.

She was speaking after a grant contract signing, which will see the sector getting €180,000 (J$20.7 million) from the European Union (EU) to be used to revitalise the banana industry.

"We really think that is discriminatory in the first instance and second, it is very hard on the farmers given that we have had so many setbacks. We are basically hoping that the powers that be will look at giving us the same sort of breaks other commodities are getting," she insisted.

"Neither yam nor potato - none of those compare with the volumes or levels at which banana is consumed; so we really need to get preferential interest rates, just like the other sectors, in order to go along with the resuscitation process.

"US$8.7 million was spent on taking chips into the country (last year). With so many farmers and people not having any employment, it is really a shame and we really need to look in a meaningful way as to how we are going to be doing business, but the cost of money is definitely too high," Sessing noted.

The EU grant will be used to put in place the infrastructure and personnel to reposition the banana industry to become competitive by, among other things, improving productivity and launching a sustainable line of value-added products.

Vice-Chairman Morris Smith explained the importance of getting everything in place by year-end: "The Banana Accompanying Measures (BAM) are supposed to start in 2013, so what we are doing is getting the right people, infrastructure, computerisation of stores and administrative staff. Key to all of this will be a marketing manager, who will be responsible for preparing a comprehensive plan to take us into the BAM. Come the BAM, we are expected to go to the next phase where we get assistance with supplies."

Funding with a difference

Smith pointed out that the purpose of the BAM is to put the industry on a path of sustainable development, which makes it fundamentally different from other previous funding assistance.

"Over the years, we have got many assistance packages, but they never ever emphasised that is the route to take," Smith explained. "So what we are supposed to do is, first, reduce imports, aim to supply the local and export demand, and be able to absorb some of the extension services at some point of time. So we are, hopefully, going to be the link between farmer and consumer - that's where we want to be!"

The first step in achieving these objectives is the appointment of a marketing manager who will prepare a comprehensive, practical marketing plan to boost the consumption of banana in its various states. Before this can happen, however, there will need to be a comprehensive rehabilitation of technical and other infrastructure, which have been in state of decline for some time. This will include an upgrade of farm stores to a supermarket-type level, stocked with an adequate inventory for banana and other farmers.