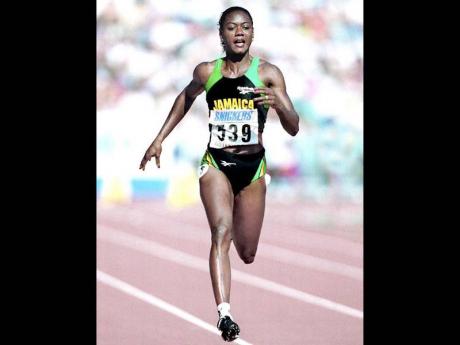 Tribute to Merlene Ottey by Judge Patrick Robinson at a sports forum held recently in celebration of Jamaica's 50th anniversary of Independence organised by the Embassy of Jamaica, Berlin, in collaboration with the Centre for Sports Science and Sports Medicine Berlin.

"THE GREATEST female sprinter in history" - this is how Merlene Joyce Ottey, born in Cold Spring, Hanover, Jamaica, has been described, and there is no one with an in-depth knowledge of track and field athletics who would dispute that claim. Let anyone who contests its validity contend with the following statistics:

Merlene started representing Jamaica at the age of 14, won her first Olympic medal at 20 in Moscow, her last at age 40 in Sydney in 2000, and at 50 anchored the Slovenian 4x100m relay team at the European Athletics Championships in 2010. At 52 - a milestone she reached just five days ago - Merlene is still capable of running the 100m in 11.80 seconds or less.

Merlene was the first woman to run the 60m indoors in less than seven seconds.

She holds what many regard as the greatest record in track and field athletics - 21.87 seconds for the indoor 200m; no other woman has run that distance indoors under 22 seconds. A measure of the significance of that achievement is that the 200m indoors is an exceedingly difficult course, being virtually one whole bend of tight corners with very little straightaway; further, among the current crop of athletes only three have run the less arduous 200m outdoors below 22 seconds, and this for a combined total of eight times, albeit, they are not yet at the end of their careers. Merlene has run the 200m outdoors below 22 seconds for a record 18 times.

Merlene has the best 100m/200m double in one day of 10.90 seconds and 21.77 seconds, respectively - a superlatively awe-inspiring performance;

Her longevity, 29 medals at the highest level and 46 overall, are an inspiration and challenge to every athlete, whether Jamaican, Slovenian or any other nationality.

But while those statistics validate the claim that she is the greatest female sprinter in history, they do not by themselves tell the story of Merlene the person, the human being, and more specifically, of the qualities that underpin that magnificent record.

Merlene lost gold medals in two 100m races at the World Championships and the Olympics very narrowly and controversially. Throughout her distinguished career she suffered other disappointments and setbacks that would have broken the will of an ordinary individual. But Merlene is no ordinary individual; she is an extraordinary human being possessed of what her biographer, Claire Forrester, calls an "unyielding spirit". This determination and resilience was appreciated by track and field fans the world over, and when she won the 200m gold at the 1993 Stuttgart World Championships, she was given a three-minute standing ovation that was the longest in the history of those Championships.

A grateful Jamaica has showered honours on her. She is an Ambassador-at-Large, was Jamaica's Sportswoman of the Year for a record 15 times, and a statue of her likeness at Independence Park, the National Stadium, has joined those of Arthur Wint, Herb McKenley and Donald Quarrie, other great Jamaican athletes, and the last being the one she has cited as having inspired her.

It is very fitting that in this, Jamaica's 50th year of Independence, the Jamaican community in Berlin, led by our distinguished ambassador, Her Excellency Joy Wheeler and the Centre for Sports Science and Sports Medicine Berlin are honouring her at this sports forum, and how appropriate that it should take place just a few days after her birthday. It is a present well deserved by this illustrious Jamaican.