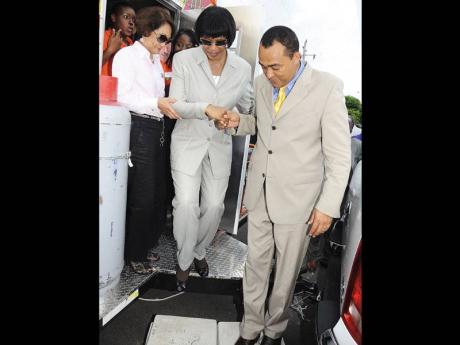 It was a very proud moment for CEO of Island Grill Thalia Lyn and the rest of the Island Grill team, at the official launch of the company's upgraded commissary held at the restaurant's head office last Friday.

The Island Grill family was lauded for its continuous support of the local agricultural sector and for its contribution to the growth of employment in Jamaica.

In her address at the launch, Prime Minister Portia Simpson Miller emphasised that, over the years, with the opening of 15 restaurants locally and with the recent opening of the restaurant's commissary, Island Grill has been presenting job opportunities to many Jamaicans, surpassing 500 employees.

Additionally, she commended CEO Thalia Lyn and her team for their commitment in supporting brand Jamaica and local farmers, from whom produce is sourced.

Guests in attendance were privy to a virtual tour of the new commissary, which was opened in December last year. A $200-million investment, it is 13,000 sq ft and has, among other features, a centralised kitchen which will assist in Island Grill's catering objectives as well as preparatory work of food items before they get to the various stores.

This is to be very beneficial as restaurant employees can turn their attention to guaranteeing full customer satisfaction without worrying about in-store production.

Last Friday also marked the ribbon cutting for Island Grill's mobile unit, which will provide catered meals in strategic areas. One of the first locations is said to be the University of Technology, where the mobile unit will be based in the mornings. The mobile unit will also be seen at various functions serving up hot Island Grill treats.