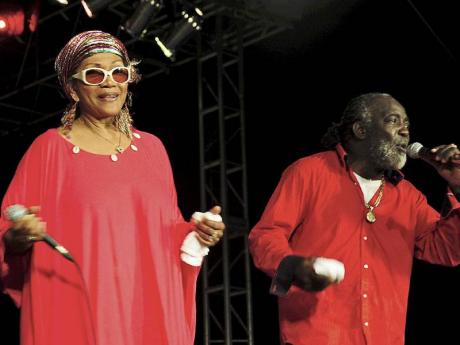 Reggae icons Marcia Griffiths and Freddie McGregor share the stage at the To Mom With Love Concert at Tropical Beach in Montego Bay on the weekend. - Photo by Sheena Gayle

Two of reggae's living legends, Freddie McGregor and Marcia Griffiths, showed their musical prowess and that their music is still relevant when they sizzled in Montego Bay at the Dream Girlz Collections' To Mom With Love Concert.

In an elaborate musical production hosted on the beach side of the Tropical Beach property, the two icons in reggae did not have enough time to sing their huge catalogue of hits that have survived decades of changes in the music business.

Dressed in white with a splash of colour for her headpiece, the reggae queen Marcia Griffiths showed no sign of slowing down, as she gave the audience an energetic performance that was well appreciated.

The audience sang along throughout her near-one-hour performance, as the All My Life singer made sure her fans, young and old, were adequately satisfied.

Despite technical difficulties with her microphone, Griffiths sang through the challenges and gave patrons hits like Fire Burning, I Shall Sing, among several others. She paid tribute to the late Robert Nesta Marley, with whom she sang with while she was part of the I-Threes with Rita Marley and Judy Mowatt.

Many laughed their way out of their chairs as the witty Samuels kept everyone engaged.

In what was described as his first Jamaica 50 tribute performance in the island, Freddie McGregor dominated the show in fine style, leaving no doubt about why the Big Ship star has been sailing at the top of music for decades.

McGregor was adamant that he was not leaving Montego Bay until patrons had enjoyed themselves.

With his Push Come to Shove and I Was Born A Winner tunes, he wooed his fans who gladly welcomed him into their hearts.

McGregor did an excellent job at paying tribute to the Crown Prince of Reggae Dennis Brown when he did a rendition of some of the late singer's work. The crowd erupted in response to the tribute.

The reggae star was not without the rest of his Big Ship clan, as Stephen and Chino McGregor shared the stage with their father at the To Mom With Love Concert.

The brief yet stimulating performance from the young stars had everyone leaving the venue feeling satisfied.