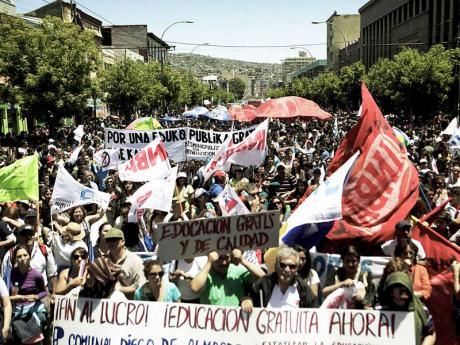 In this November 17, 2011 file photo, people march to demand education reform with signs that read in Spanish 'Put an end to profits! Free education now!' in Valparaiso, Chile. Despite more than a year of mass protests calling for swift and profound changes in education, few students have seen any real benefits. The government plans to raise about US$700 million in taxes for education, but students say that's not enough.

Cristobal Steffens and his sister Natalie were the first in their family to go to college, and both emerged with good jobs. But they also joined the 500,000 Chileans who have had to take on sometimes-crushing debts. Their father put up the family home as collateral for student loans whose interest rates soared beyond what he could pay. Now the bank is threatening to evict them.

"My folks wanted to give us the best, they wanted us to become professionals and we had no other option. But this loan has practically seized our lives," said Steffens, a veterinarian who blames his early baldness on the stress of losing his childhood home.

"Chile's educational system is a fraud," he said. "And we're living a daily nightmare."

Despite more than a year of mass protests that raised hopes across Chile for education reform, few students have seen any real benefits. Politicians and students have hardened their positions, but the system is still failing families with poor-quality public schools, expensive private universities, unprepared teachers and banks that still make huge profits on loans that most Chileans can ill afford.